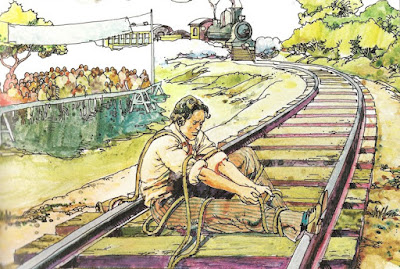 Last weekend our friend Joe Notaro at Harry Houdini Circumstantial Evidence shared a post about Houdini's Train Track Escape - Believe it Or Not. This is an event I've never been able to confirm. The sole source appears to be Walter B. Gibson, who did at times inadvertently spread mythology (including the trapped under the ice story). But Joe has found an account written by Gibson in 1954 that now gives us a location: Dresden, Germany. That's good! And it's bad.
I will let you go read about the escape at Joe's site. Instead, I want to talk about how this illustrates what I've come to think of as "the Germany problem."
From 1900 to 1913, Houdini performed in Germany as much as any other country. He spoke the language and was generally very comfortable with all things German. He even preferred traveling on German steamships. His engagements in Germany were lengthy and he seems to favor the country as a place to try things out for the first time. We know he did his first challenge packing crate escape in Essen Ruhr, learned to fly in Hamburg, and debuted The Water Torture Cell in Berlin. It's even said he tried out a version of Buried Alive for the first time in Germany.  So Germany is a big part of Houdini's early career. Yet we know almost nothing about these engagements!
The reason for this seems due to the fact that Houdini history has largely been written by English speakers, and the stories of his German exploits would found be in German newspapers. Sure, we have a passable amount of information that can be found in his English pitchbooks (the Cologne trials, Kleppini, etc.). But I'll bet my knackwurst there is so much more!
It now appears the train track escape may be one of those "lost" German stories. But at least we now know where to look. Houdini performed at the Central Theater in Dresden during the entire months of September 1900 and October 1903. So if there is any newspaper account of this escape, it would be during those times. Also, the Harold Kellock biography claims Houdini did his first bridge jump in Dresden. That's another one I’ve never been able to confirm because...the Germany problem.
So here's a shout out to any German Houdini nuts who care to take up the challenge and uncover Houdini's adventures in Dresden. Not only might you find this train track escape, but you also may find his first bridge jump, and who knows what other untold stories!
Oh, we also have a Netherlands problem. But I guess we can tackle that another time.
Train track illustration from The Great Book of Magic by Wendy Rydell.