In the 1920s a New York Daily News columnist pen-named "Sally Joy Brown" would invite groups of children to Broadway shows and other various entertainments. All they had to do was write her a letter explaining a good deed they had done or some other similar instruction. In December 1925, Houdini arrived on Broadway with his 3 Shows in One at the 44th Street Theater. So Sally arranged a trip to see Houdini and even meet him backstage.
The exciting day was December 19, 1925, as you can read her column for that day: 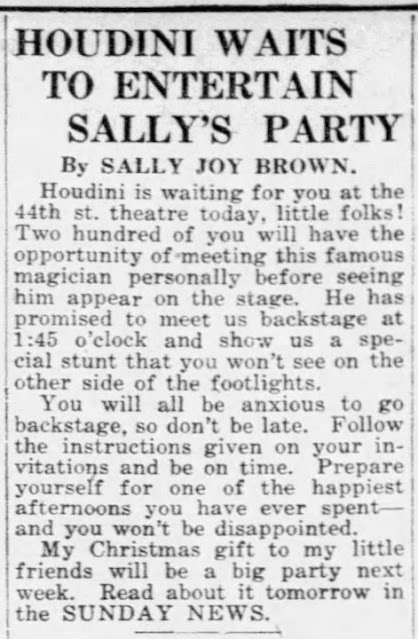 It appears everyone had a great time, with Sally reporting the next day: "[Houdini] was wonderfully nice to the children backstage when we visited him in there before the show and made friends with them immediately."
And the best part of all this, there's a photo!
Notice that Houdini is using his two large brass tubs to "produce" the children. It's commonly believed these tubs were used to fill his Water Torture Cell and/or Milk Can. But I'm now wondering if they were actually used as magic props in the 3 Shows in One? Or maybe this was just for the photo. Either-way, what a fabulous backstage moment to have captured in a pic.
Speaking of Houdini at the 44th Street Theater, here's a little gem that ran a few days later in the Daily News. Too good to not share.

Below are some more special shows (with unseen photos) that Houdini did for children.