Dai Vernon does the trick that fooled Houdini

There are no shortage of videos on YouTube of magicians demonstrating Dai Vernon's famous "trick that fooled Houdini." One of the best is by Steve Cohen. But here's a video of The Professor doing it himself! I don't know what show this is from and it's too bad we don't have the lead up to the trick, but it's still pretty great as Vernon references Houdini throughout.
Vernon performed this for Houdini during an S.A.M. banquet at the Grand National Hotel in Chicago on February 6, 1922. Vernon did the trick for Houdini three times and, it's my understand, varied his method. While I don't doubt this happened, I've never heard an account from anyone who witnessed it. Vernon's own mementos from that night recently sold at a Potter & Potter auction.
What I'd love to know is what happened to the signed four of diamonds?
UPDATE: Our good friend Joe Fox has identified this as the Canadian show Celebrity Revue hosted by Carol Taylor and Peter Pit. Also, the guest in the tuxedo who we briefly see applauding near the end is none other than Steve Baker aka Mr. Escape! The below appeared in the December 1976 Genii. 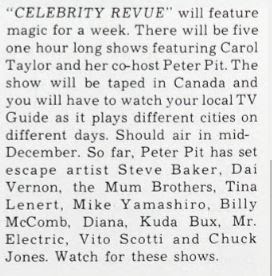