One of Houdini's go-to challenges was to be tied with heavy rope by Navy sailors or seamen of some sort. The precise manner in which Houdini would be bound was always spelled out step by step in the challenge handbills, and it always involved him lying on a plank with a broomstick under his legs. No photos exist, and try as I might, I've never been able to envision exactly how Houdini was tied.
That's why I was very excited to discover this illustration from the Boston Post following one these challenges from "T" Wharf fishermen on September 22, 1911. Now that's a rope tie! 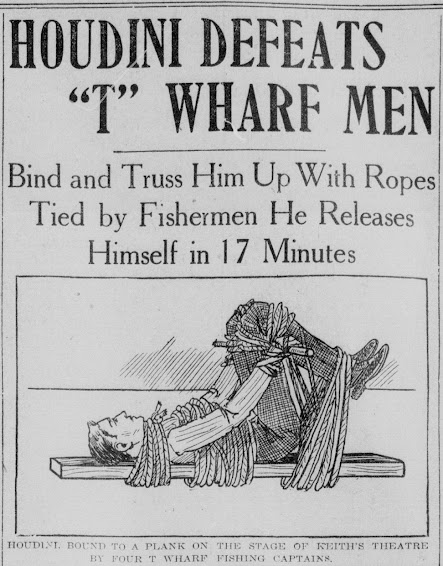 Not only did the paper do a great job of illustrating the rope tie, but their description of the challenge itself is pretty terrific. Below are a few excerpts:

Harry Houdini made the escape of his life last night on the stage of Keith's Theatre, when he extricated himself from hundreds of knots and fathoms of rope, tied by four veteran T wharf fishing captains.
On the stage was a large committee of seafaring men. They were men who could appreciate skillful knotting of cordage, for many a time their safety has depended on the trustworthiness of knots in ropes and lines.
There was a sort of grimness to the preparations that did not escape the audience, for the honor of T wharf and Atlantic avenue was at stake.

Captain Richard McDonald of 336 Summerfield St., East Boston, who has had 40 years' experience, calmly removed his coat and prepared for business after Mr. Houdini had made a short speech.

The article details the process of tying Houdini, then... 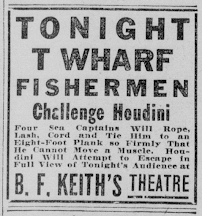 For the first few minutes it seemed impossible that he could get slack enough to escape. He struggled, but the cordage would not give. It seemed that the captains had made good. High up in the gallery a roughly clad man gave a cheer.
Houdini worked away, wiggling, pulling and twisting, until he kicked off one shoe. The other then followed, and soon he had slack enough in the ropes binding his legs to permit him to pull out with his teeth one of the knots that held his right hand.
In the audience were hundreds of women, some of whom seemed to grow faint at the sight of the struggling man, but when freedom was assured they cheered him on.

When Houdini had freed his hands the rest was simple and he stood erect, bowing to the valley of cheers.

"It was the hardest experience of my life," said Mr. Houdini, as he exhibited cuts and scars made by the ropes and cords.
Among the first to congratulate Mr. Houdini were the captains.

Below are links to more Houdini rope tie escapes. For those who have subscribed to my WILD ABOUT HARRY WEEKLY newsletter, you can expect and a nice rope-tie related EXTRA this Sunday.