Houdini, Barbara Fritchie, and a return to Frederick 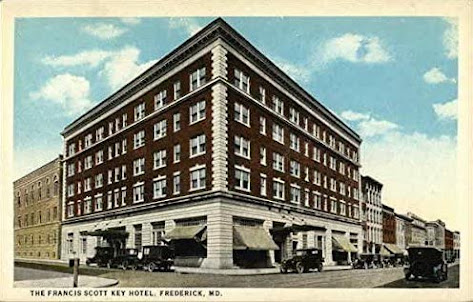 On November 25, 1924, Houdini gave his spiritualism lecture at The Armory in Frederick, Maryland. The morning of his arrival, Harry and Bess sat down with a reporter in the main dining of The Francis Scot Key Hotel (above), for which Houdini expressed admiration.
The interview ran the next day in the Frederick News. In it the reporter is full of praise, stating: "Quiet and unassuming, he was the essence of friendship. He immediately places one at ease and when Houdini starts to talk, all one has to do is listen." Houdini even performed his thumb racket at the table. But what really stood out for me is when Houdini reveals he had been in Frederick once before.

In case you don't know (because I didn't), Barbara Fritchie was an elderly woman who defiantly flew the American flag from her house during the Civil War. She became famous in folklore as the heroine of a 1863 poem by John Greenleaf Whittier in which she tells a Confederate general, "Shoot if you must this old gray head, but spare your country's flag." 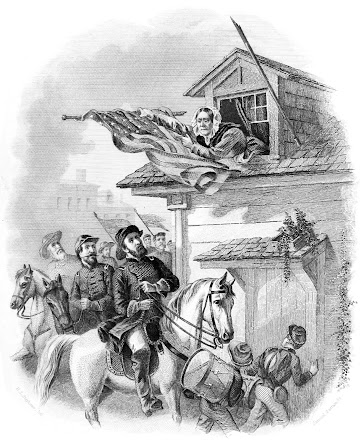 A 1927 reconstruction of the Barbara Fritchie house still stands in Frederick today. 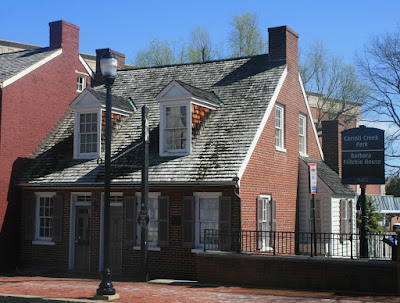 At first I was skeptical of Houdini's story. It was my understanding that the Welsh Bros. Circus toured exclusively in Pennsylvania. So I thought Houdini might have whipped up this memory just for the local reporter.
However, I did some digging and discovered that the Welsh Bros. Circus did play Frederick for one day on September 14, 1898. This is indeed when The Houdinis were with the troupe! The circus set up on Burger's lot on East Patrick street. The local paper even mentions the parade:
So it looks like Houdini's memory is legit, and it's a treat to have a new story from his circus days. (I later discovered the Welsh Bros. also played a single day in Cumberland, Maryland. But Houdini in Cumberland is another story.)
The reporter then turns his attention to Bess. The result is this gem:

I have a feeling Bess was probably serious about this. Just as she worried about her husband when he suspended himself in a straitjacket, I'm sure she worried about him now and for good reason. Houdini was courting real danger with his exposures and there were no shortage of frauds and fanatics who could have done him harm. But just like Barbara Fritchie, he flew his flag anyway!