Houdini debuts 3 Shows in One, but not where we thought 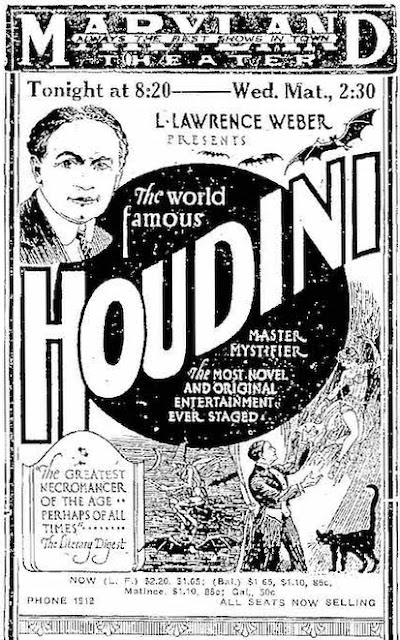 The Cumberland Maryland was located at 37 N. Mechanic Street. It first opened in 1907 and sat 1,800. Houdini appeared here for three days from August 31 to September 2. On his final day he gave a special matinee tailored to children in addition to his evening show. 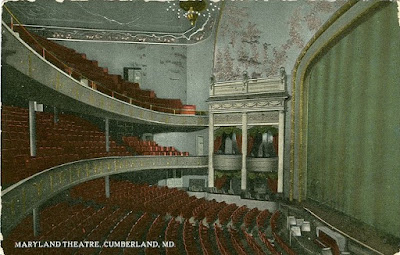 The Cumberland Evening Times also printed the entire show program. Nothing revelatory here, but nice to have this record of the earliest incarnation of the 3 Shows in One. You can see that Paligenesia is a standout of the first act. I recently learned Houdini performed the effect using a cockney accent in the style of Dr. Lynn. I bet his cockney was terrible!
This was the only time Houdini played his 3 Shows in One in Cumberland. But Houdini had been to Cumberland at least once before. The Welsh Bros. Circus played the city on September 24, 1898, during The Houdinis second tour with the troupe. It was here Houdini famously recored in his diary, "Rain hard. No dinner."
The Maryland Theater eventually became a movie theater and remained so for decades. It finally closed in October 1963 and was razed in December 1966. Below is the site of the theater today.
Postcard image from Cinema Treasures, an essential resource for information on old theaters.
UPDATE: I embarrassed to say that Dean Carnegie already made this Cumberland discovery using Pat Culliton's Houdini The Key. Dean included it an an excellent post on his Magic Detective blog back in 2017 called A Forgotten Houdini Associate. So all credit goes to them. Sorry Dean and Pat!
Related:
Written by John Cox at 8:52 AM

Email ThisBlogThis!Share to TwitterShare to FacebookShare to Pinterest
Tags: [History], 1925, 3 Shows in One, Paligenesia, Theaters