Houdini's tour of Australia in 1910 is most celebrated for his aviation exploits. But he also wowed audiences with escapes, including a leap from the Queen's Bridge into the Yarra river in Melbourne on Thursday, February 17. What makes this particular stunt so famous is the story of how Houdini's jump dislodged a suicide from the river depths, causing the corpse to float to the surface. The crowd feared the dead man was Houdini himself, until the escapist surfaced beside it. But did that really happen?
Below are a set of photos and an account of the stunt from the Melbourne Weekly Times. As you can see, no corpse involved, but some nice details, including that Houdini wore a blue bathing suit instead of his usual crimson. 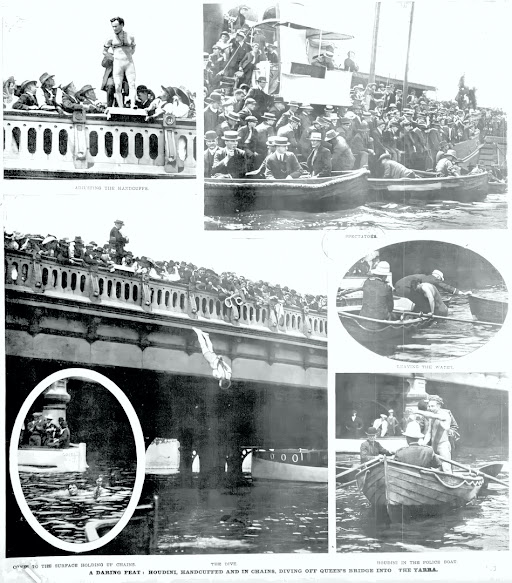 MELBOURNE, Thursday.
The announcement that Houdini, who is at present appearing at the Opera House, would dive from Queen's Bridge into the Yarra attracted many thousands of people this afternoon. Every point of vantage on the Bridge was quickly occupied by spectators, as were also the roofs of the sheds lining the north and south banks of the river and the various steamers lying in the stream. On the river itself were craft of all kinds, densely crowded with men women and children, eager to view the sensational spectacle. It was with the greatest difficulty that a large force of mounted and foot police could secure even space enough for a narrow line of vehicular traffic.
At about 1.30 Houdini drove up on to the center of the bridge in the motor car. Making his way through the crowd he mounted the parapet, where he was manacled with stout chains. After being handcuffed his hands were fixed behind his back. The chains were passed over his neck and round his body, and were fastened with a stout brass padlock in the middle of his back.
Clad in a blue jersey and blue trunks but with his arms and head bare, he stood unconcernedly in the blazing hot sunshine. When the manacling arrangements have been completed he looked quietly down on to the lower wharf, and asked "Is it already Jim; is the way clear?" Receiving a reply in the affirmative he first took several long breaths, then, without the slightest hesitation, dived into the river. In about sixty-five seconds he came to the surface again free of his chains, which, by the way, weighed about 26 pounds. The chains themselves he brought up in his hand. As he mounted the steps, Houdini was loudly and continuously cheered, the spectators thronging round him as he again made his way to the waiting motor car. From the time he mounted the bridge until he was driven off again in the car only about seven minutes elapsed.

There are some other details that didn't make this report. The temperature that day was a scorching 101 degrees. Several onlookers fell into the river. Following the escape, reporters on the dock asked Houdini how he liked the taste of the water. He replied by grimacing and saying it was "the least toothsome" he had ever sampled. Later news accounts made light at the idea of Houdini "insulting" their river water.
Houdini's Queen's Bridge jump was his first outdoor stunt in Australia. He told reporters he had considered making a leap from the deck of the ship Malwa when it first arrived in Fremantale, but talk of shark infested waters convinced him otherwise. He later made a 31 foot handcuffed jump into the Domain Municipal Baths in Woolloomooloo Bay in Sydney (below). That jump resulted in him hitting the water wrong and blackening both eyes. 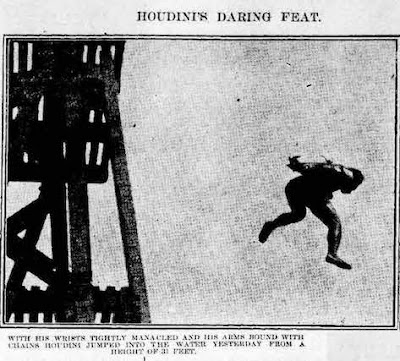 So what about the whole floating corpse thing? If this happened, not a single newspaper (that I've been able to find) reported it, which does not seem likely. The story appears to be a Houdini invention. I'm not sure when he first started telling it, but it appears in a 1918 Boston Post interview along with his famous trapped under the ice story. In it Houdini emphasizes his shock at finding himself beside a dead body. "As long as I live I will not forget that incident. It was the worst thing that ever happened to me."
Like reporters in Houdini's day, biographers can't seem to resist this story. The Australian corpse surfaces in Kellock, Gresham, Christopher, and even Kalush. Only Ken Silverman leaves it out of his account of the escape.
With or without the corpse, I still enjoy the story of Houdini's Melbourne bridge jump, especially as the Queen's Bridge is still there today! 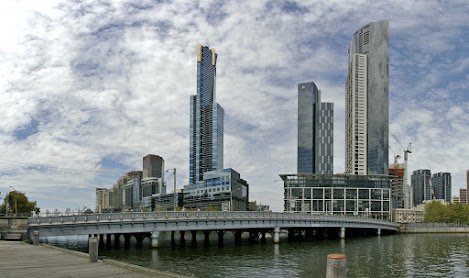