Houdini returned to the cover of Genii The Conjurors' Magazine with Vol. 27, No. 2 in October 1962. Editor Bill Larsen had promised a true Houdini "collectors item" with this issue, and he delivered. But this issue also contains some information that surely must have shaken the Houdini world of 1962. 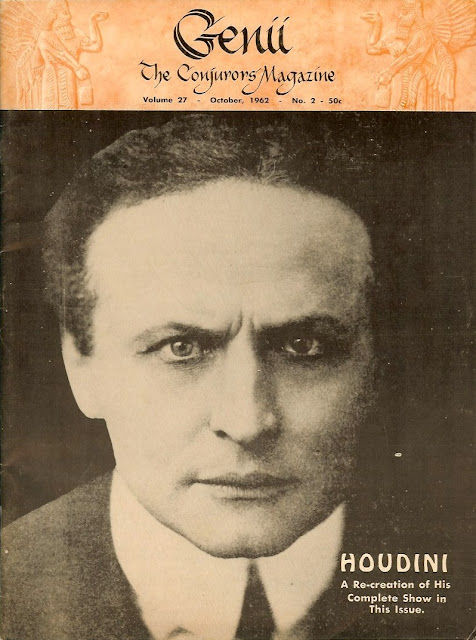 As with the October 1961 Houdini issue, Patrick Culliton -- only 18 at the time -- is the driving force behind this issue, providing unique photos and articles. (It's mentioned in this issue that Patrick is now "the proud possessor of the original Houdini Sub Trunk.")

First up, Patrick collaborates with Arnold Furst to present a terrific overview of Houdini's full evening roadshow at The Maryland Theatre on August 31, 1925. (The article says it was Baltimore, but it was actually Cumberland.) This would later appear in a collected booklet called Great Magic Shows. Patrick then solos with an article all about the Water Torture Cell, presenting one possible method of escape. It's not exactly the method Houdini used. Patrick would ultimately reveal the real working secret of the USD in his 2010 book, Houdini The Key. 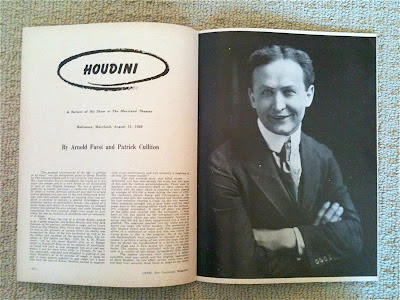 Patrick then presents a provocative article called, "Houdini Facts You Never Knew." The first fact is a shocker:

You may not know that data was uncovered during the filming of George Pal's feature "The Great Houdini," that would indicate that the Rabbi Weiss was not Houdini's father. Herman, Nathan, Bill and Ehrich were the sons of a grocer in Hungary and Cecelia Steiner. The Rabbi Weiss came to Appleton from London, where he had carried on his scholarly researches. There he married Houdini's widowed mother and they had three children.


The source of this information was George Boston, who was technical advisor on Paramount's Houdini. Of course, Patrick doesn't believe this story today (and was probably skeptical at the time). Birth certificates and immigration papers have firmly established Houdini's parentage. But it is interesting to know this was an active rumor circulating in magic circles in 1962.

The second unknown fact details a performance of being frozen in ice that Houdini is said to have given in 1926.

In the non-Houdini category, I can't help but marvel at the overtly sexist ads for "Himber's Custombilt Magic". Each of the six ads feature a pretty girl in a bikini with tag-lines like, "Is this what you want?" and "Beautiful Merchandise?" Ah, the days of Mad Men...