Houdini's tie-cutter manual and other rarities sell at Bonhams

A nice selection of Houdini rarities sold today in Bonhams Fine Books and Manuscripts auction. While an original annotated typescript for A Magician Among the Spirits was promoted as the auction highlight  (it even made the catalog cover), the item that struck me as the true gem was Houdini's very own 1891 union employee manual from his days as a New York tie-cutter. 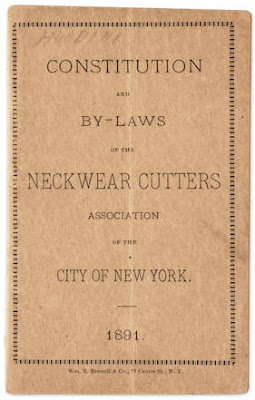 HOUDINI'S OWN COPY OF THE TIE-CUTTER'S MANUAL. [HOUDINI, HARRY. 1874 – 1926.] Constitution and By-Laws of the Neckwear Cutters Association of the City of New-York. New York: Wm. B. Bromell, 1891. 32mo (124 x 78 mm). Publisher's printed wrappers, center fold to front cover, two paragraphs bracketed in the margins, possibly in Houdini's hand, pencil note "HOUDINI" to upper cover, portrait of Houdini pasted to rear cover. Provenance: Harry Houdini (letter of provenance from Charles Reynolds, dated May 26, 1999, addressed to:) Doug Edwards; John A. McKinven (sold his sale, Potter & Potter, Chicago, May 13, 2012, lot 240).
HOUDINI'S OWN COPY OF THE REGULATIONS OF THE NECKWEAR CUTTERS ASSOCIATION. From the letter of provenance from Charles Reynolds: "[this manual] was Harry Houdini's own manual when he worked as a tie-cutter for H. Richter's Sons at 502 Broadway, New York City. A page of this manual is picture in the book Houdini, His Legend and His Magic that I co-authored with Doug Henning in 1977. Houdini took special interest in the union's protection of secrecy—an attitude that later affected his outlook on magic." Henning and Reynold's book was heavily illustrated with items from a collection given to Henning by Ruth Kavanaugh, Houdini's niece.

The manual sold for $3,187 including premium.
The annotated A Magician Among the Spirits manuscript sold for $20,312 (inc. premium). A facsimile edition of this manuscript was published in 1996 by Kaufman and Greenberg. 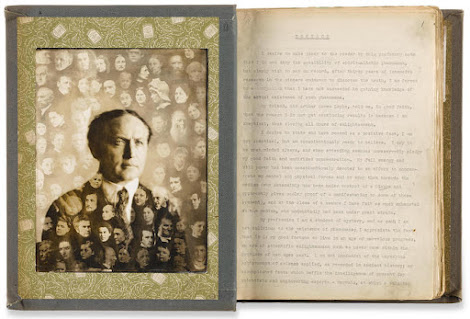 A copperplate for what may be the first illustrated advertisement for "The Houdinis" sold for $5,737 (inc. premium). Bookending that is Houdini's last known full color poster, "Buried Alive!", which sold for $7,650 (inc. premium). 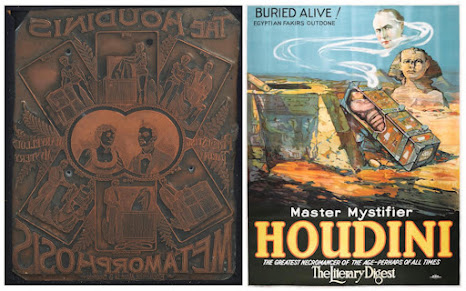 Congrats to the winners!