The Houdini footage you were never supposed to see (2/2) 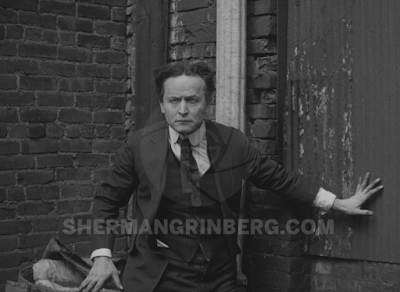 In 2018, two remarkable reels of Houdini film footage were discovered in the vaults of the Sherman Grinberg Film Library in Los Angeles. I had the great pleasure of debuting this footage alongside Lance Watsky, Manager of Media Archives & Licensing at Sherman Grinberg, during a special Magic Castle "Behind the Bookcase" event last year. Now I'm thrilled to be able to share this film with everyone.
Reel One contained footage that is generally known, but in such great first generation quality that much of it seemed new. Today I bring you REEL TWO which really is all new. In fact, it's the Houdini film you were never supposed to see. But I'll get to that.
While I've embedded it below for convenience, this is HD quality so I encourage you to watch it on YouTube where you can enlarge it for best results.
Okay, you might be asking yourself, "What the heck was that?" That's what we were all asking when we first saw this reel at the Magic Castle back in 2018. My first thought was that this might be part of the film Houdini shot during his 1920 European tour. But the point of those street shoots were to showcase European locations and landmarks, and there's nothing like that here. It's also striking that this footage reveals the use of an obvious stuntman on safety wires.
So is there anything in the footage itself that can help us explain it? The warehouse location could be anywhere and there's nothing distinctive about Houdini's appearance. But the footage does contain periodic flash frames with strange markings on them. 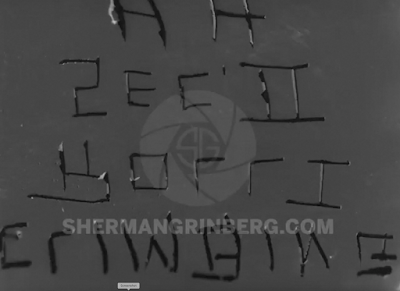 Or maybe not so strange. Because when I turned this image upside down and held it up to a mirror, I saw the following:
While the writing itself doesn't really tell us much, these identification frames do match similar frames on the Reel One footage of Haldane of the Secret Service and The Man from Beyond. So that suggests this footage is from the Houdini Picture Corporation era and was likely shot in 1921.
Then Joe Notaro made a breakthrough observation that The Man From Beyond features a scene of Houdini's Howard Hillary using bedsheets to climb down the side of a large stone wall (a location that's yet to be identified, by the way). This also shows Houdini using bedsheets as a rope. So could this be an unused version of that same stunt? 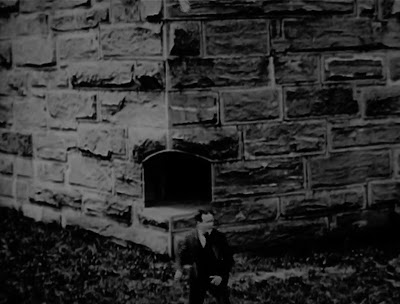 I took a good look at the scene in the movie and what clinched it for me was the matching wardrobe, right down to his bow-tie being undone. So, yes, I believe what we are seeing here is the complete and uncut footage for an unused version of this same stunt from The Man From Beyond. And the idea here is actually superior! I love how Houdini/Hillary uses the window shutters as a means to swing his way across the length of the building in order to reach the drain pipe. That's an idea that would hold up today.
However, it just doesn't work here. It is clearly a stuntman on visible wires who is never able to sell the window shutters idea. None of this could be cut together to make a convincing scene. So it's likely Houdini screened this footage and realized they had to do the entire thing over again, dropping the shutter idea, changing the location, and shooting from a greater distance to better conceal the stuntman and safety lines.
So think about it. This is footage Houdini probably only ever viewed once, and might have even ordered it destroyed. Not only was it unusable, but it clearly reveals that he did not always do his own stunts, and we don't want that! Yet somehow this reel of film survived in pristine condition for 100 years and here we are able to watch it today thanks to our friends at the Sherman Grinberg Film Library. Fantastic. 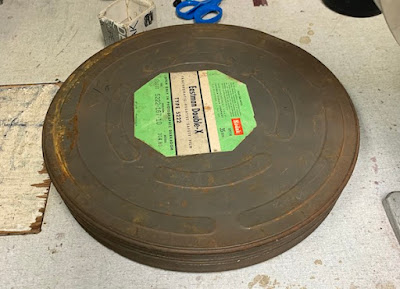 Additional thanks to Joe Notaro at Harry Houdini Circumstantial Evidence (where you can see a timecode breakdown of both reels) and the Houdini Museum in Scranton.

Email ThisBlogThis!Share to TwitterShare to FacebookShare to Pinterest
Tags: [History], 1921, Houdini Picture Corp., Movies, The Man From Beyond (1922)