Today I continue my scene by scene dissection of Paramount's 1953 biopic Houdini, in which I'll attempt to make the case that it's much more historically accurate than it is given credit. And anything else that comes to mind. Last time we met Harry and Bess at a New York Dime Museum. We now DISSOLVE TO... 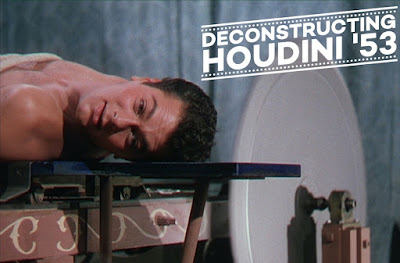 Chapter 3: Buzz Saw
It doesn't take Houdini '53 long to give us an iconic death defying escape. The idea that Houdini would do such an escape this early in his career is inaccurate. But it is true that he performed in Coney Island and this is a highly effective and entertaining scene. In fact, this was probably my favorite scene as a kid. It's also true that Coney Island played a key role in the courtship of Harry and Bess Houdini.
We start with Bess and the unfortunate Fred (Peter Baldwin) strolling the boardwalk of Coney Island. The large fair-like rides in the background are anachronistic to be certain, but we've already seen how Houdini forgoes historical accuracy and instead uses a blend of modern and period that might be more agreeable to a general audience. 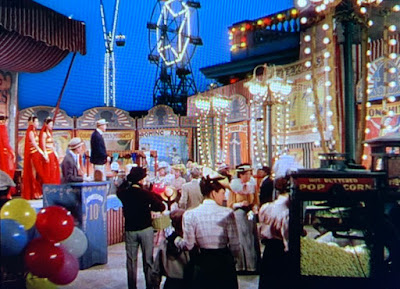 Fred asks Bess why she felt like coming to Coney Island tonight. Bess answers, "Oh, I don't know, I just wanted to come." But she seems distracted, looking around, as if she has a very clear idea why she wanted to come and what she is looking for. And then she spots it: HOUDINI THE GREAT.
I'm not entirely clear on Bess's motivations here. She appears to have had a sudden change of heart and engineered this visit to Coney Island expressly to see the man from the Dime Museum, as if she has been tipped off to his presence. But another way to have played this would have been to have had Bess surprised to see Houdini there. This might have even been the writer's original intention, playing on the idea of fate pulling the two together. But the way it is staged, Bess seems to know exactly what she is after. By the way, how cool is that poster! 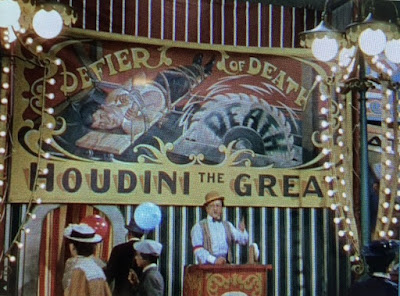 This time Bess doesn't see a tuxedoed magician. Instead she sees a shirtless death-defier. It's as if, having been fired from the Dime Museum, Houdini has sunk even lower down the ranks of show-business, now risking his life in a dingy sideshow (or as dingy as this movie allows anything to be).
As for the escape itself; Houdini never did such a buzz saw escape in his career. But he did take a famous photograph roped to a buzz saw table in 1919. This was part of series of staged publicity photos that Houdini took in Hollywood while making his first feature film, The Grim Game. This photo appears in the Harold Kellock book and was certainly the inspiration for the escape we see in Houdini. 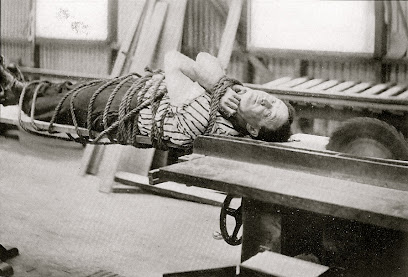 "Will Houdini survive? Or will he become a chip off the old block?" The uncredited carnival barker here is Oliver Blake, just one of many wonderful character actors from Hollywood's Golden Age that festoon Houdini '53. After offering a comically brief silent prayer, he throws the switch and Houdini begins to slowly inch towards the spinning blade.
But Houdini has spotted Bess in the crowd and is so bewitched by her presence that he seems to forget all about the escape at hand. This is fantastic stuff. There's also some good humor as the sideshow barker continues with the established script ("Five feet! He's in trouble now!") while under his breath he urges Houdini to hurry up. Among the horrified spectators is Maxine Gates. 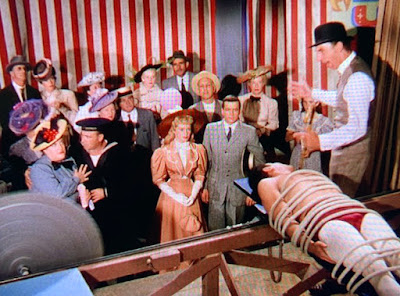 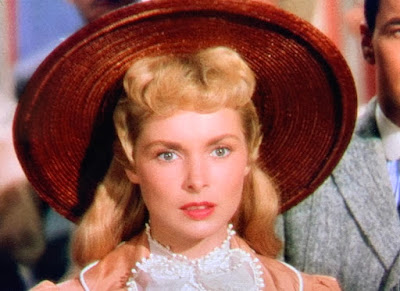 Bess finally breaks the spell when she realizes Houdini is in danger. She screams for the saw to be turned off (recalling her protection of the Wild Man). This snaps Harry into action and he frees himself moments before he reaches the spinning blade. Notice how the sound of the buzz saw fully takes over the soundtrack in these final moments, as if we ourselves are inches from the blade. Also notice how the sideshow barker has his eyes covered at this point. 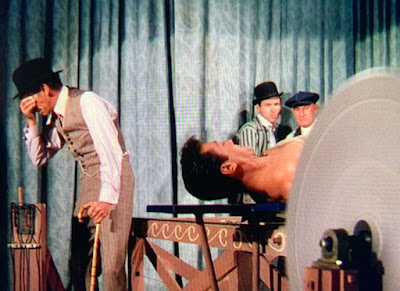 This establishes a pattern that will repeat during their marriage. Houdini both thrills and terrifies Bess. She also seems to be the only person in the audience who know when Houdini is in true danger. This also mirrors the final scene when she screams out during the performance of the Pagoda Torture Cell...too late.
Bess is thrilled by his escape, but Fred quickly pulls her away, and when Harry emerges from the tent, she has once again vanished into the crowd. 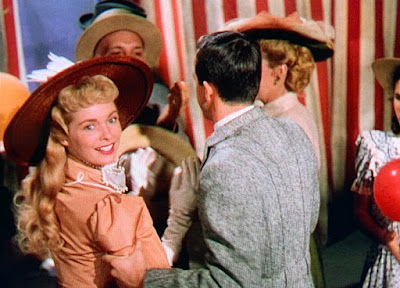 Ok, sure, none of this happend. But the real Houdini and Bess met in Coney Island and would return on their anniversary. It was a special place for them. So staging a key scene of their courtship in Coney Island is a great nod to their real love story. And the idea of Houdini facing off with a buzz saw is not a whole cloth invention.
But what about our heroes? Once again they have been separated. Could a third time be the charm?
Click to see all chapters of Deconstructing Houdini '53