Houdini made his first appearance in Portland, Oregon, during the week beginning Sunday, October 24, 1915. Below is a terrific ad for his opening day from The Oregonian. 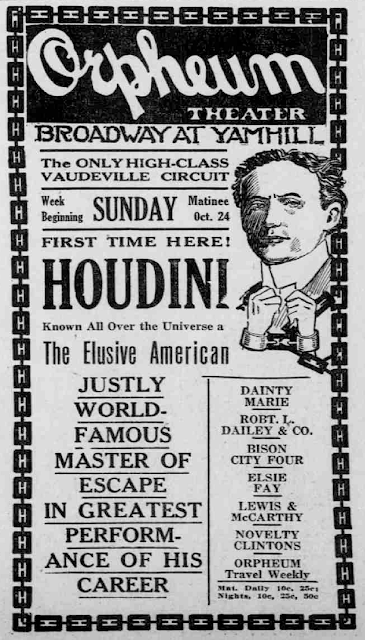 Houdini announced his arrival with a suspended straitjacket escape from Portland's Oregonian Building on October 25. This was only his fourth suspended straitjacket escape (by my current count). The Oregonian stood at 135 SW 6th St. (today 537 SW 6th Ave) and was demolished in 1950.
During this 1915 engagement Houdini played the Orpheum Theater on Broadway. Portland had two Orpheums on Broadway and there is conflicting information about which theater would have been active at this time. But the above ad specifies the location as Broadway at Yamhill, which would make it the original Orpheum located at 759 SW Broadway. 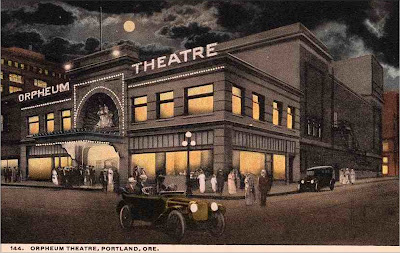 The theater converted to movies in 1915 and the Orpheum shows relocated up the block to the Heilig Theater. It was razed in 1976 and today is the site of Nordstrom.
Houdini returned to Portland in 1923, playing the Heilig Orpheum at 837 SW Broadway the week starting Sunday, March 11. Along with the Water Torture Cell Houdini presented an escape "in which he loosens himself while tied hand and foot and head in a framework." Also on the bill that week was Jack Benny.
Houdini's final appearance in Portland was when he gave his spiritualism lecture at the Portland Public Auditorium at 222 SW Clay Street on November 4, 1924. As this was the night of 1924 Presidential election, the lecture was poorly attended. Nevertheless, the papers reported that, "The audience was frankly delighted and was friendly to Houdini, bursting into frequent and prolonged applause."
The Portland Public Auditorium later became the Keller Auditorium and still stands today. Below is how it looked in Houdini's time and now. 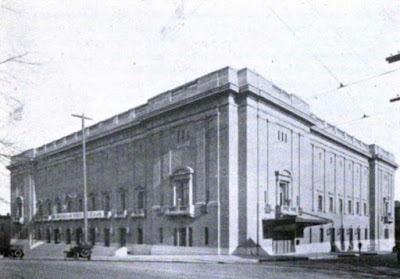 Thanks to Bill Mullins for finding the 1923 advert.
Related:
Written by John Cox at 7:37 AM