Haldane of the Secret Service screening in Portland

There will be a screening of Houdini's Haldane of the Secret Service with live musical accompaniment at the Clinton Street Theater in Portland on Tuesday, March 19 at 7 PM. Below are details. 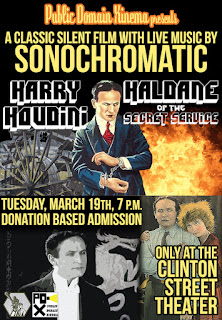 The master escape artist, Harry Houdini, stars in one of his few screen roles as Heath Haldane, secret service agent extraordinaire, who is hot on the trail of the counterfeiters who killed his father. It has action, adventure, romance and some of Houdini's signature escape tricks and stunts.

Join us at the next installment of Public Domain Xinema at the Clinton Street Theater with live music by Sonochromatic for Haldane of the Secret Service (1923) starring Harry Houdini and silent film star Gladys Leslie. The musicians of Sonochromatic will be in from Corvallis to accompany this silent classic on the big screen, plus newsreels and cartoons from 1923 to really take you back and a historical introduction from curator Ygal Kaufman.

Thanks to Dick Brookz at the Houdini Museum in Scranton for the alert.

Email ThisBlogThis!Share to TwitterShare to FacebookShare to Pinterest
Tags: Events, Haldane of the Secret Service (1923), Screenings