The "Houdini Shrine" has been found (kinda) 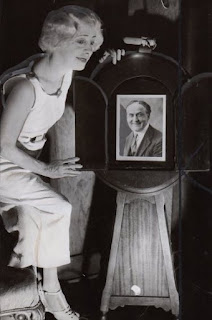 One of the great lost Houdini artifacts is the so called "Houdini Shrine" that belonged to Bess Houdini and featured as a centerpiece of the Final Houdini Seance of 1936. The shrine can also be seen in the movie Religious Racketeers and several photos of Bess in her later years. But after Bess's death in 1943, the shrine vanished without a trace.
Well, I'm happy to report that the "Houdini Shrine" is now part of my collection! Okay, so it's not the Houdini Shrine. It's a reproduction created by Manny Weltman for the 50th anniversary recreation of the Final Houdini Seance held at the Variety Arts Center in Los Angeles on Halloween 1986. For that occasion Gerrie Larsen played Bess and Stefan Krayk played Edward Saint. (You can read more about that seance HERE.)
How I came across this is a story I will share another time. For now, I just wanted to share this particular "Houdini Shrine" as it was also somewhat lost to time. Gives one hope that maybe one day the original might surface!
Thanks to Joe Fox.
UPDATE: Bill Schulert has shared this photo from the Jon Oliver collection. Is this Bess's original Houdini Shrine? 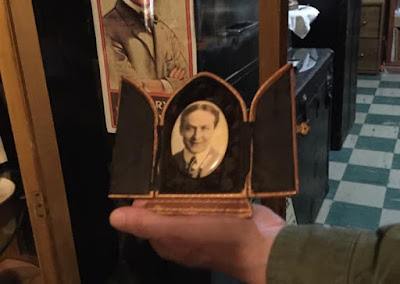