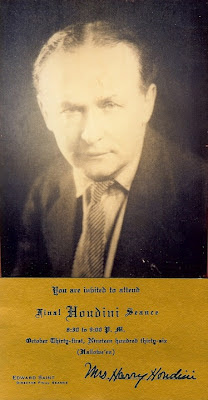 With the big news that the 86th Official Houdini Seance will be held this year as a public event in Fort Worth, Texas, I thought it was a good time to look back on another semi-public Houdini seance that many not not be aware of.

On the night of October 31, 1986, a handful of lucky participants, including myself, attended a Houdini seance at the Variety Arts Center -- a short-lived sister club to the Magic Castle housed in a historic theater in downtown Los Angeles -- that honored and recreated the famous 1936 Final Houdini Seance on its 50th Anniversary.

Organized by Houdini collector and historian Manny Weltman, the reenactment started with the tickets. Each ticket was an exact replica of the gold invitations from the 1936 seance with the modern details on the back. To enhance the event, guests were encouraged to come dressed in "optional 1930s dressy attire" (my buddy Mark and I rented vintage tuxedos from Western Costume).

Guests arrived at 7pm for an 8:30 seance, just as they did in 1936. On the seance table were laid out the items exactly as they were laid out 50 years earlier, including a custom built copy of the Houdini shrine and a replica of the Mirror handcuffs, reported to have been "brought from Montana".


Bess was portrayed by Geraldine Larsen Jaffe, matriarch of the famous Larsen magic family, who was also good friends with Bess Houdini and attended the 1936 seance. For the occasion, Gerrie wore a jeweled Russian brooch given to her by Bess. The part of Edward Saint was played by Stefan Krayk, complete with fake beard. Magic Castle co-founder Milt Larsen introduced the seance, and "Bess" and "Ed" read from the same script the real Bess and Ed had prepared for the original seance.


Much like the evening in 1936, Houdini did not return, and there were no mysterious storms that night which would have really made this a true recreation. After the seance, guests lingered for an informal chat with Gerrie who shared stories about her friendship with Bess.

At the close of the evening, all the guests received a bottle of Magic Castle Houdini labeled wine, which were spirits enough for most. 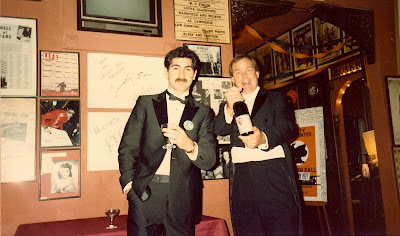 Thanks to Joe Fox, who was also there that night, for loaning me "ESCAPISM" January 1987 which contained a full report on the seance and provided the details I've long forgotten.
Written by John Cox at 7:00 AM