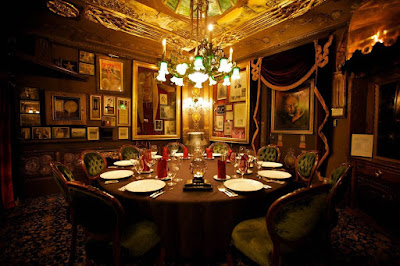 "After years of expertly rattling chains and ringing tambourines, we thought that our spirits deserved a vacation. Our GM, Joe Furlow, is working on the schedule and details, but it looks like current séances will run through to December of this year and then officially cease."


For a while, the Séance Room will become a private dining room with "a special dining experience and a private magic show." Meanwhile, a committee of members, including Mike Elizalde, John Gaughan, and Max Maven, as well as the three resident seance mediums, Leo Kostka, Rob Zabrecky, and Misty Lee, will be working on an all-new seance experience. "We will be inviting a few additional spirits and installing astonishing, never-before-seen effects," says Jim.

And what about Houdini in all this? Jim continues:

"After he enjoys a little R&R at the beach, Houdini will be returning to the second floor, stage managing each performance, and taking his cues. (Once a performer, always a performer!) We’ve promised him that our séance will be “more Houdini” than ever, and he’s promised to slip a few real surprises up his ectoplasmic sleeve."


I'm both excited and spooked (ha!) by this announcement. No question updating the séance effects is great idea, and the members consulting on this project are top notch who no doubt will do amazing work. My concern is what this might mean for the room itself.

The Houdini Séance Room is a special place inside the Magic Castle, with a unique energy that has everything to do with the history on the walls and the power of Houdini. When guests enter this room, their voices lower and their eyes light up. It's clearly a place of worship. It's also a link to the Larsen family and their relationship to Bess Houdini. And a "Houdini Séance" is part of Hollywood history as well.

Hopefully the history and special energy of this famous space will be respected and Houdini will remain front and center. I'll be watching with interest and will share updates here.

Coincidently, here's an article that I just came across from June 23, 1969 that describes the then newly installed seance experience.