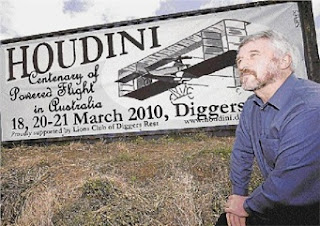 A new roadside billboard has gone up near the entrance to Diggers Rest, Australia, as part of the preparations for a massive celebration commemorating Houdini’s first flight on that continent 100 years ago.

Diggers Rest resident Steve Samagalski was asked by the town's Lions Club to design the roadside billboard to mark the event. Mr Samagalski, an IT manager, was keen for the challenge, despite not having much artistic experience.

The preparation of the 6x2-metre billboard involved about 40 hours of work, and took about six weeks to complete.

"The expectations of the billboard were on a scale far larger than anything I had created before," Mr Samagalski said. "I presented the design to the Lions club in August and it was enthusiastically received."

Mr Samagalski said it was great to be able to be a part of such a proud moment in history. "Houdini's flights in his Voisin biplane March 18, 1910, are recognized as the first officially recorded powered aeroplane flights in Australia," he said.

The Houdini celebrations are set for March 18-21, 2010, and will include a special ceremony, a Houdini-Centenary air-show, magic performances, a one-third scale model of Houdini’s Voisin, and more. Details can be found at the impressive new Diggers Rest Houdini website: http://www.houdini.diggersrest.com.