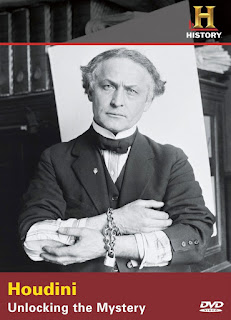 A new retail version of The History Channel documentary Houdini: Unlocking the Mystery

(not to be confused with A&E’s Houdini: Unlocking the Secrets) has been released on DVD.

Houdini: Unlocking the Mystery first aired on Halloween 2005. Produced by New Wave Entertainment and hosted by Lance Burton, this doc highlights footage from the 2004 Las Vegas auction where David Copperfield bought the Water Torture Cell for $300,000.

In my opinion this is the best of all the Houdini documentaries, with containing interviews with George Hardeen and even Margery's great granddaughter, Anna Thurlow.

A DVD copy had been available direct from The History Channel website, but that version

came with generic cover art.
Written by John Cox at 11:17 AM