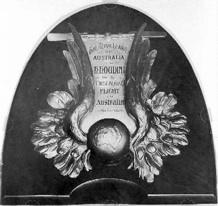  The Aviation Historical Society of Australia (NSW) and the Sydney branch of the Royal Aeronautical Society's Australian Division are both backing a move by the Powerhouse Museum to celebrate the 1909 flight of Englishman Colin Defries as the nation's first under control and power, reports Steve Creedy, aviation writer for the The Australian.

The claim is Defries flew a Wright Model A aircraft about 115 yards at Sydney's Victoria Racecourse on December 9, 1909. The Sydneysiders say this puts him well ahead of the man the Victorians consider to have made Australia's first powered flight, legendary American escapologist Harry Houdini, on March 18, 1910.

The question of who was responsible for the first controlled, powered flight has been muddied for decades and there was enough confusion in 1959-60 to prevent a special event for the 50th anniversary.

AHSA (NSW) president and Powerhouse Museum transport curator Ian Debenham says extensive research conducted by fellow ASHA member John Scott shows that it was and it had found "unequivocally" that the Englishman made the nation's first controlled, powered flight. However, Debenham agrees that it is a matter of historical record that "Houdini flew the wings off Defries".

But he notes that even though Defries' flights were "rather more tentative and straight line", it met the requirements for powered, controlled flight by the Gorell committee, set up to determine Britain's first flight.

"In other words, you couldn't start off with a run down a hill to get airborne, it had to be level ground, and you just had to go further than a ballistic hop would allow. (Defries) was flying out of ground effect, he was flying 15 to 20 feet and he was a trained pilot."
 
Scott points to several extracts from Sydney newspapers, including a report in The Daily Telegraph that says: "The Wright aeroplane accomplished its first flight yesterday afternoon at Victoria Park racecourse. After several preliminary tests, it succeeded in flying 115yds, the height from the ground varying from about 3ft to 15ft."

Houdini's first flight was also short and at little more than tree-top height but it was a controlled circuit of Plumpton's paddock at Diggers Rest.

"The first, and two subsequent flights that day were witnessed by at least nine people who signed a witness statement," he says "Reporters from The Argus and The Age were also present."

Not surprisingly, the Victorians are sticking by their man.

Brett Luxford, the manager of business growth and sustainability at the Melton Shire Council, says Houdini was still responsible for the first sustained powered flight and says one major difference was that the escapologist's flight was officially witnessed by the Australian Aerial League.

"I think some would acknowledge that Defries' was the first powered flight but in terms of controlling it and sustaining it, I think Houdini is widely recognised as the first controlled sustained and powered flight in Australia," he says.

Scott also dismisses a claim from South Australia that 19-year-old car mechanic Fred Custance beat Houdini to the punch with a controlled circling flight in a Bleriot XI monoplane on March 17, 1910, at Bolivar.

Diggers Rest will celebrate the Centenary of Houdini’s historic flight, March 18-21, 2010, with a special ceremony, a Houdini-Centenary air-show, magic performances, a one-third scale model of Houdini’s Voisin, and more. Details can be found at the impressive new Diggers Rest Houdini website: http://www.houdini.diggersrest.com/
Written by John Cox at 11:31 AM