Dorothy Dietrich and Dick Brookz of the Houdini Museum in Scranton attended Tuesday's reading of  The Brothers Houdini at the Consulate General of Hungary in New York. I'm pleased to share their review of the evening. 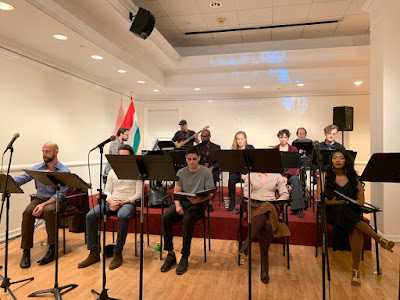 The Brothers Houdini review
by Dorothy Diertrich and Dick Brookz.

We spent a interesting evening at very well presented reading of the The Brothers Houdini... The Musical at the Hungarian Consulate on 223 East 52 Street in New York City.

The evening started with champagne, wine, orange juice and a fun assortment of Hungarian snacks.

There were several very special moments during the reading.   The beginning of the play sets up the strong relationship between Houdini (Perry Sherman) and his younger brother Theo (Rico Le Bron ). They were close in age by two years. Houdini did have a great relationship with his brother, which is an ongoing theme of the show. The truth is Houdini died in his brothers arms. It presented the two as great pals with a lot of plans for their successful future.  They worked the streets to raise money to help their family. A scene shows the proud boys saying ... Shake me Momma (who was played by Amy Bodnar)... as the coins fell from the boys pockets. Amy portrayed her part as a loving mother who was very supportive of her sons adventurous ways.

It covers the fact that their father Samuel (Wade Mc Cullum) was not in good health. He died when Houdini was only 18 and Houdini vows to his mother that they will take care of her, which the brothers do. All is well with them as a team, until they meet lovely Beatrice Rahner (played by Quiana Holmes) who was working with an act called the Floral Sisters.

A precious moment when Bess tells Houdini about how much she loves the song Rosabelle. There’s a great sense that they have met their perfect love. They soon after get married.  This leads to one of the very special moments during the reading.

The show is not linear, but goes back and forth in time. Several of the transitions are very clever and magicial. For instance Bess taking on the role of assistant in the act is depicted by having Harry and his brother Hardeen present the trunk trick but at the finale instead of the brother coming out of the trunk Bess appears. A very exciting and magical transition as a trick, but in time and space as well. There should be more moments like this.

Another is the scene regarding Houdini’s contentious run in with the noted spiritualist Mina Crandon, aka Margery (Laney Allan), who played several other roles to great aplomb. Laney’s feisty performance gave a real sense of who Mina was. Margery holds a seance for Houdini and apparently “talks” to Houdini’s mother, which he exposes as a ruse. Though this never happened, this way, it was again a dramatic juxtaposition of two actual events. 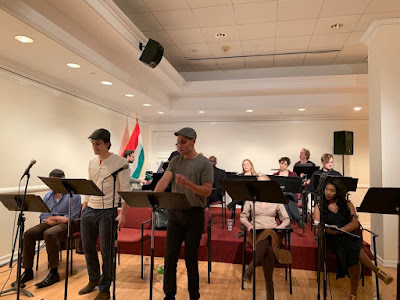 Houdini sets out on tour having great success with his new agent in charge of the tour, but leaves Bess behind.  Beck introduces Houdini to his new attractive assistant Daisy (Pilar Martinez). Daisy is interested in being more than assistant to Houdini.

Gordon Whitehead was played by Terrell Foster-James who presents the famous punches to Houdini’s abdomen.

The fun story plays loose with the facts. Although Houdini may have toyed with the Bullet catch in his youth and been hurt, the show has him presenting it successfully. In this same vein it has him rescued out of the Water Torture Cell by breaking the glass. I guess in a way, a homage to the Tony Curtis movie.  It also has Houdini taking punches in the stomach, incessantly from childhood on to his untimely death, which could have been a one time event.

Toward the end of the story, Peter Scattini plays the theater manager who insists that Houdini performs even though he is gravely ill.

The play has a lot of potential. The fact that it’s a musical is even more exciting.

As to the songs in the show, only about half were presented in the time allotted, but they move the story along well. However the only memorable melody that people might leave humming or singing was the classic Rosabelle, so it should be reprieved several times, and possibly at the end.

It would be great to have a Broadway Show about Houdini.

We will do all in our power to help any such production. 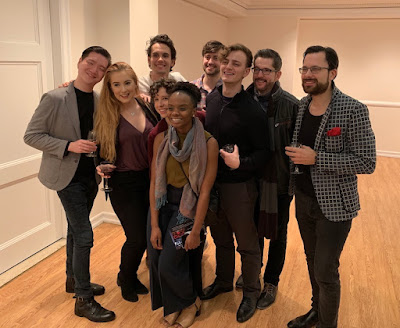 Thanks to Dorothy and Dick for the review and pics.