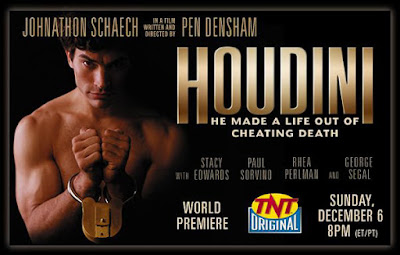 Today marks the 20th anniversary of the TNT Original movie HOUDINI. The two hour biopic aired on December, 6, 1998 at 8pm, and was immediately played a second time as an "encore." The movie was heavily promoted by TNT as a cable television event.

Written and directed by Pen Densham (who also produced the documentary Houdini Never Died), HOUDINI stars Johnathon Schaech as Houdini, Stacy Edwards as Bess, Mark Ruffalo as Hardeen, and George Segal as Martin Beck. For whatever reason, I've never warmed to it, even though the production design is excellent, as is the musical score. But it was the first Houdini biopic in 22 years, so it was treat to settle in and watch it unfold...20 years ago tonight.

TNT's HOUDINI is available on DVD.