Harry Houdini and the Circumnavigators Club 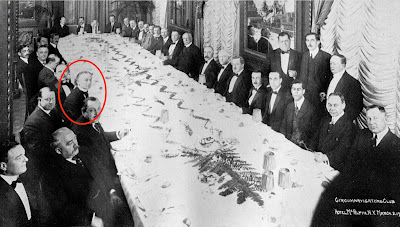 Houdini enjoyed belonging to fraternal clubs such as The Society of American Magicians, The Magicians Club, The Rabbis' Sons' Benevolent Association, the Elks, and the Masons. But here's a club that I had no idea Houdini belonged to until I got a friendly email from David Mink, the current president of the intriguingly named Circumnavigators Club.

The Circumnavigators Club was founded in 1902 and headquartered in New York. As the name implies, it was made up of individuals (exclusively men until 1983) who had circumnavigated the globe. Houdini joined the club in 1912, citing his tours of Europe and especially his journey to Australia as his credentials as a world traveler.


Accepted as a member, Houdini became "Circumhoudini" in the tradition of naming club members with "circum" before their last names. Houdini attended his first banquet at the Hotel McAlpin in New York on March 2, 1916. A photograph of the dinner (above) was shared in the March issue of the official club journal, The Log, which included the following account:

Circumhoudini traveled from New Orleans especially to attend the dinner, and he spoke very nicely of how the Circumnavigators' Club was the first club he had joined and that he made this long journey to meet the officers and members for the first time because he felt that it was "home" to him; that he knew many of the members through reading The Log and that he was not disappointed. Circumhoudini said he flew the first aeroplane in Australia; that he is one of six pioneers living who were the original aviators and that he stopped flying when women took it up. Circumhoudini is a very moderate eater at all times and he did not care for "another piece of pie." Furthermore, on his recent trip to the Pacific coast and back he got the whole "pie" in the way of front page publicity in the leading newspapers of the different cities.


If you're wondering what the whole "piece of pie" thing refers to, according to David Mink: "Harry was the featured speaker at a dinner along with John Henry Mears who set the world record for circling the globe. Mears related that people of many nations, particularly the Japanese, are very hospitable, and in Tokyo he was offered another piece of pie that cost him a bit of time on this record trip. Harry who spoke next [said he] didn’t care for another piece of pie. I suppose this got a laugh!"

Houdini would occasionally contribute to The Log himself. In 1921 he took out a two page ad. The first page was blank -- Houdini having "slipped through" to the second page. "That's my act!"


Houdini also wrote articles for the club journal, including a remarkable piece called "My Happiest Christmas" in 1923 (made even more remarkable by the fact that Circumhoudini was Jewish). In it he tells the story of when he stumbled on an idea how to make extra money as a messenger boy during the holidays. This story appears in many biographies, but Houdini's account in The Log provides more details, including a nice tidbit about how his brother Bill "did the best handwriting in the family." Below is the first page for a taste.


Houdini remained an active member of the Circumnavigators Club for the rest of his life. At one point he and John Phillip Sousa sat on the board of governors together. Below is a photo of Houdini and The Log editor in 1918. 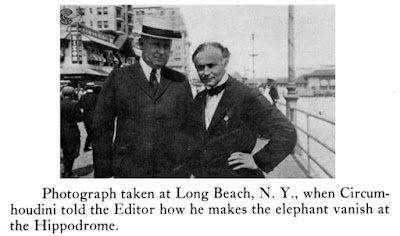 The Circumnavigators Club remains active to this day. The Log is still published and available to anyone to read at their official website. There you can also find details on how to join. The club's mission is worth repeat here in full:


Thanks to David Mink for alerting me to this and allowing me to share these remarkable mementos of "Circumhoudini". 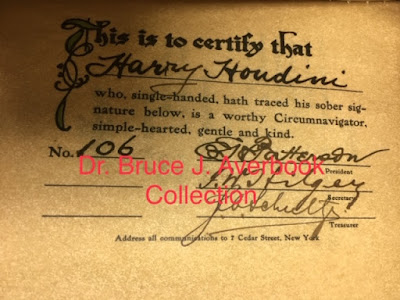 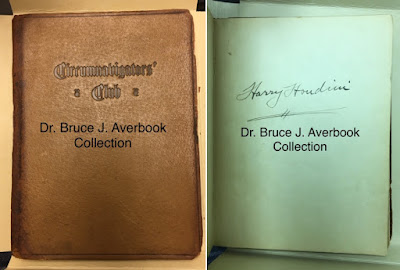 David Mink has also uncovered a few more items related to "Circumhoudini," which I will share in the New Year.