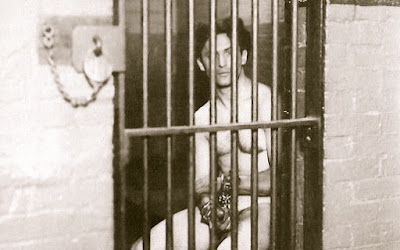 Houdini cultivated good relationships with both police and the press, which certainly helped in his escapes from jails and the subsequent news coverage. But here's a case where it all appears to have gone wrong. The resulting coverage is unflattering (and a bit bizarre), but it does give us a different picture of what sometimes occurred during a Houdini jail break.


This seems to have been of a pattern. For for many years Houdini was not able to win over the New York City police and press. He received similar snarky coverage in The Times for his Boudini underwater challenge in 1905 (I wondering if this might be by the same reporter), and police repeatedly stepped in and shut down some of his outdooor stunts, forcing him to sometimes perform them unannounced.

Thanks to Harry Houdini.