A terrific poster for "Mrs. Harry Houdini and America's Most Famous Magicians in The Greatest Magic Show Ever Presented" sold on eBay today for $261.99. If this poster looks familiar, that's because it appears in Walter B. Gibson's The Original Houdini Scrapbook (page 197). But there it's in black and white. Here we see it in glorious color! 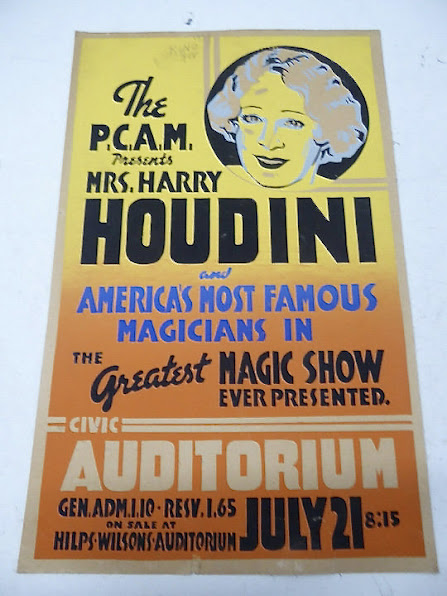 This show was part of the 5th annual P.C.A.M. (Pacific Coast Associations of Magicians) Convention in Reno, Nevada in 1937. Bessie was a regular attendee at P.C.A.M. gatherings and typically the guest of honor. On this occasion she was presented with the keys to the city by Mayor John A. Copper and crowned "Queen of Magic" by P.C.A.M. president Caryl Fleming. Below is an excerpt from the July 19, 1937 Reno Gazette that covered her arrival in "The Biggest Little City in the World". 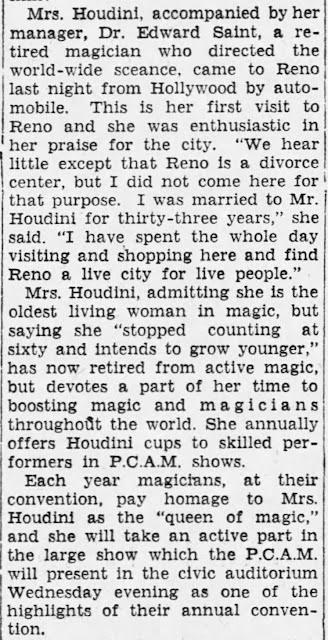 The Reno Gazette also covered the show, running the below photo of magician Bob Stull doing the "Shooting a Ribbon Thru Girl" illusion that would later be seen in Houdini (1953). 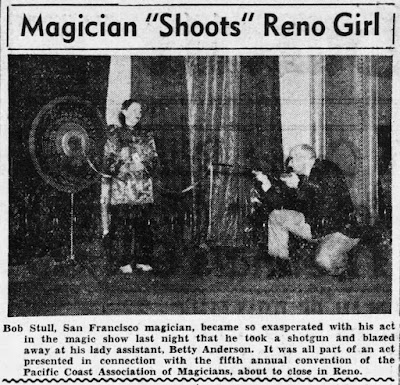 According to a report in Genii, Bess didn't actually performed in the show. Instead she was introduced and gave a short speech, noting: "I did the substitution trick for your grandfathers."
Related:
Written by John Cox at 4:43 PM