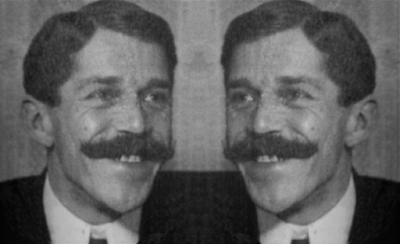 For many years the great Patrick Culliton, a.k.a. Houdini's Ghost, has expressed his belief that Houdini's first chief assistant Franz Kukol did not leave Houdini's employment in 1914 to go fight for his native Austria during World War I, as was reported by newspapers at that time (some saying Houdini dismissed him because of his nationality). Patrick believes Houdini helped Franz "disappear" by fabricating the story and changing his name to Frank Williamson. As Williamson, Franz continued to assist Houdini for the remainder of his career.
As evidence, Patrick cites a letter written by Houdini in September 1924 to the Roosevelt Memorial Association. This is ten years after Kukol's supposed dismissal, yet in the letter Houdini states:

Mr. Frank Kukol will call you personally and give you further details about the group photographs in question.

This is pretty solid proof that Kukol is still around and going by the name of Frank in 1924. So he either never went to war or had returned. So this part of Pat's theory is, to my mind, confirmed.
But what evidence do we have that he became Frank Williamson? There are plenty of people named Frank in the world, and the 1924 letter still calls him Kukol. This part of Pat's theory had remained unconfirmed for me. But now a document has surfaced that that I believe provides the proof! 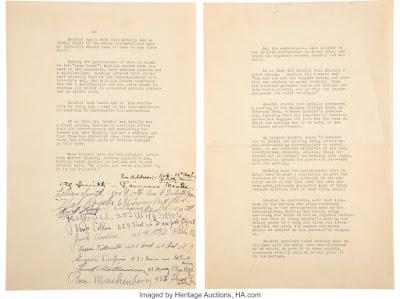 The above legal statement witnessed and signed by a collection of Houdini associates sold yesterday at Heritage Auctions for a healthy $718 (including buyers premium). It relates to Houdini's lawsuit with medium Arthur McNally in March 1926. The document is interesting in itself, but what caught my eye is that one of the 11 signatures is Frank Williamson (who gives his address as 38 Marcy Place, NYC).
I checked Williamson's signature against some known signatures of Franz Kukol. It you put them together, the similarities are striking! Especially the "F" and "r" in both names. 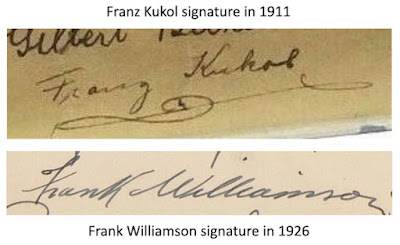 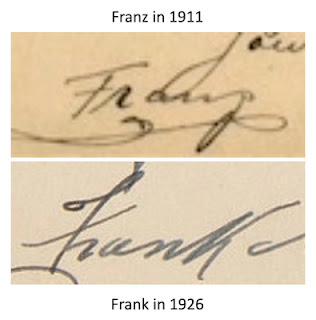 This is petty good evidence that Franz and Frank are indeed the same man. So I'm now happy to accept this second part of Patrick's theory. Franz Kukol became Frank Williamson.
The third part of Pat's theory is his identification of the man below as Frank/Franz. This man shows up in many photos assisting Houdini and is even in Haldane of the Secret Service. He's most clearly seen in the famous monk rope tie footage shot on the Haldane set in 1921. Thanks to the recently uncovered Sherman Grinberg footage, we can now see his features in detail. 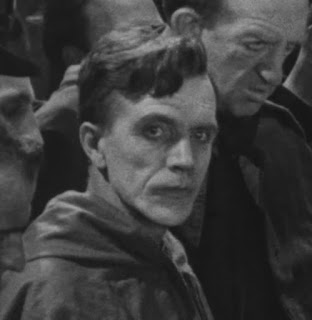 I admit I'm still struggling to see Franz in this man, so I'm not yet 100% convinced of this last part of Patrick's theory. But the way things are going, I will not be surprised when we find evidence that proves Patrick correct once again. Because he's not just "Houdini's Ghost." He's also Franz! 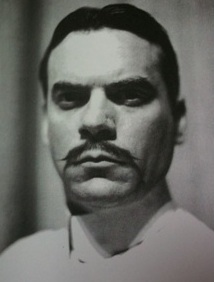