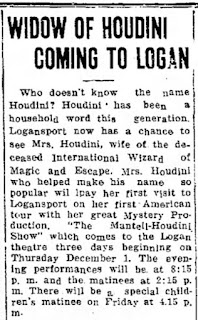 After Houdini's death, Bess took on several projects to earn income and perpetuate Houdini's name and fame. None of them worked out in the long run. While we know about her Manhattan Tea Room and the Frozen Man act, here's one that's new to me: The Mantell-Houdini Show.

In 1932, Bess teamed up with "The Great Mantell" as part of 2 1/2 hour magic show. Despite claims that Mantell was a protege of Hermann the Great and "the closet personal advisor of Mr. and Mrs. Houdini for many years," I've never heard of him. Could Mantell have been Edward Saint? It certainly sounds like his kind of ballyhoo. Bess and Ed met in 1930 and were living together in Florida at this time.

The Mantell-Houdini Mystery Production, as it was first called, appears to have made its debut at the Shirne Theatre in Fort Wayne, Indiana on November 24, 1932 (Thanksgiving). Among the feats performed by Bess was "The Spirit Hands of Madam Golum," with Bess acting as a medium. It was also reported that The Great Mantell did escapes. 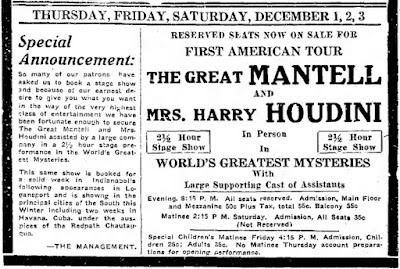 After Fort Wayne, the show moved to Logansport, Indiana, where it played 3 consecutive days at the Logan Theater. An added feature was passing 750,000 volts of electricity through a young female assistant who then lit cigars and torches from the tips of her fingers and tongue.

At the start of the program, Mantell informed the audience that "in the days of old" his wonders would be attributed to supernatural powers, but that every trick was merely "a matter of skill and illusion." (Again, sounds like Saint speak by way of Harry.)

The local paper gave the show a good review: "Houdini-Mantell Show Pleaseing To Audience At Logan." But despite claims that the show was booked for a week in Indianapolis and also would play two weeks in Cuba "under the auspices of the Redpath Chautauqua," I could find no mention of the Mantell-Houdini show beyond Logansport.

UPDATE: Our friend Bill Mullins has found a review of the Mantell-Houdini show in The Sphinx, January 10, 1933. Bill has also found enough references to Mantell before and after this show that he believes he was not Edward Saint. Here's the review:

Mrs. Beatrice Houdini, widow of Harry Houdini, and Honorary member of the Parent Assembly of the Society of American Magicians, has returned to the stage and recently appeared with "The Great Mantell" of Jonesville, Michigan, in a full new show of magic and mystery. The company opened for a three-day stand at the Shrine Theatre, Fort Wayne, Indiana, on Thanksgiving Day. Ten assistants and the usual stage crew assisted at the performances in what is known as "The Great Mantell-Houdini" Mystery Production. Many illusions were presented, including the tea chest, substitution trunk, pillory and Asrah. The first part of the show is described as the wanderings of an explorer who discovers an old Chinese castle containing mysterious boxes, torture apparatus and the like. As each discovery is made the effect is produced on the stage, and as a climax the Great Mantell produces Mrs. Houdini from a cabinet and she vanishes again after a performance of small magical effects. The entire company appeared in Chinese costume. Prior to the opening of the tour two preliminary performances were given by the company at the Jackson, Mich., State prison before 5,000 inmates. After Ft. Wayne the company played the following week at the Logan Theatre, Logansport, Ind., and at New Albany in "The Greatest Mystery Extravaganza Production on the Entire Globe." Mantell served as master of ceremonies and presented a number of spectacular effects as well. The "Death Chamber" in which a girl is placed to have thirty-eight swords thrust through the box is said to be the smallest ever used by any magician.