The well-researched 64-page booklet Houdini's Tour of Australia by Leann Richards has been reissued in a printed edition by Ginninderra Press. This is the first time a printed edition has been made available since the original release in 2006. 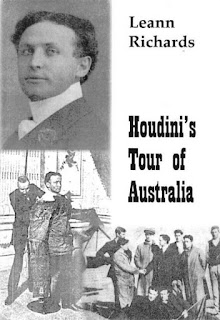 When escapologist Harry Houdini toured Australia in 1910 he brought magic, mystique, his wife and an aeroplane. Houdini conquered crowds and nearly caused riots, he escaped straitjackets and shackles and flew through the air. Some said he was supernatural, to others he was a fraud, but Houdini confounded them all. This is the story of Harry Houdini, ‘the greatest and most astounding artist that ever appeared in Australia’.


Houdini's Tour of Australia is available at Amazon.com and Amazon.co.uk. It's also available for the Kindle.