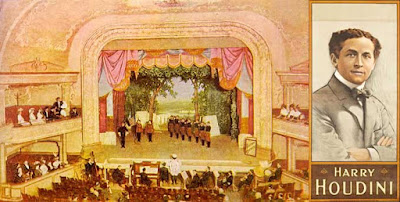 We all know Houdini played Coney Island in his early days. In fact, Coney Island is where he famously met Bess. But once Houdini became a headliner, Coney Island became a place of leisure for Harry and Bess. It was not the kind of place where you would expect to find a performer of Houdini's stature. Or so I thought!

Turns out Houdini did play a week in Coney Island at the height of his career in 1915. In fact, it was 103 years ago today. (Which is not a coincidence.)

Coming off two weeks at the prestigious Palace Theater on Broadway, Houdini opened at Henderson's Music Hall on August 16, 1915. Located on the corner of Surf and Stillwell Avenues, Henderson's was Coney Island's most popular venue for music, theater and vaudeville. (The Marx Brothers made their first public appearance at Henderson's in 1907.) Here Houdini featured challenge escapes and, presumably, his Water Torture Cell. To promote his appearance he did an Overboard Box escape from Ward's Baths on Tuesday, August 17 at 4:30pm.

Below are newspaper adverts and an account of this rare reappearance of Houdini in Coney Island. As a bonus, I've left the ad for Steeplechase Park attached with its grinning clown, now an iconic symbol of Coney Island's heyday. 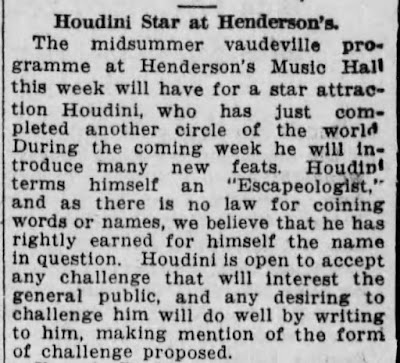 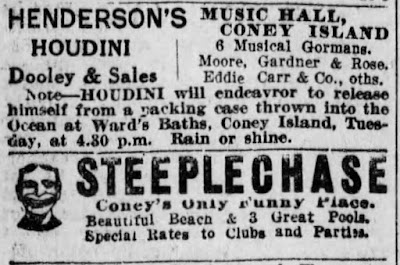 Houdini's engagement lasted one week and, as far as I know, he never played Henderson's or Coney Island again. I've never seen a program for this week nor a photo of his Overboard Box escape at Ward's Baths. But now that we know he was here, maybe we could find something? Paging the Coney Island History Project!

Henderson's Music Hall closed in 1926 and became "Lillie Santangelo's World in Wax Musee" until 1984. The building was renovated and restored in 2004. But like so many Coney Island landmarks, it was purchased and unceremoniously demolished by Thor Equities in 2010.

Below is a video tribute to the theater where Houdini made his Coney Island comeback 103 years ago today.