Today I continue my scene by scene deconstruction of Paramount's 1953 biopic, HOUDINI, in which I'll attempt to make the case that it's much more historically accurate than it is given credit. Also anything else that comes to mind. Last time we examined the Main Titles. Today we FADE UP on... 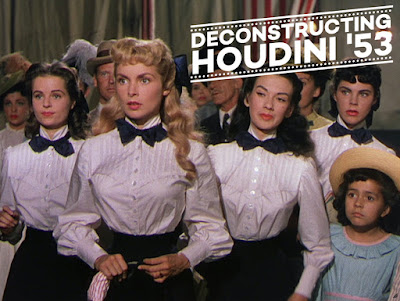 Chapter 2: Dime Museum
The sequence that opens Houdini (1953) is a delight on many levels. While a fabrication from start to finish, it nevertheless still contains many elements from Houdini's real life. It's also just good old fashioned Hollywood storytelling that sets up the movie and our main characters beautifully. But let's tackle it beat for beat.
We open with a group of uniformed school girls passing "Schultz's Dime Museum," ignoring the busking of the mustachioed owner Mr. Schultz (Sig Ruman) at the door. But then one of the girls, blonde-haired Bess (Janet Leigh), encourages her classmates to slip in for a quick look. "The man said it was educational, didn't he?"
Something to consider here is the association of a school uniform with a Catholic school education. Is Houdini slyly establishing that Bess is Catholic as she was in real life? (Harry's Judaism will later be slyly established.) Irregardless, meeting Bess as a schoolgirl nicely comports with the "approved mythology" of the Harold Kellock book and Bess's own colorful version of events. But in reality, Bess was a performer like Harry when they met. Of course, with her long blond hair and full figure, Janet Leigh looks nothing like the real Bess Houdini. But I don't think Bess would have objected being portrayed by such a glamours movie star. 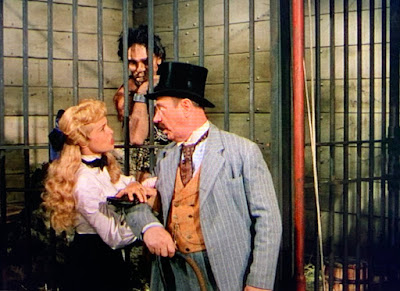 Inside the girls step up to the first exhibit, Bruto The Wild Man, who snarls and carries on like, well, a wild man! Showing courage and compassion, Bess steps in to stop Mr. Schutz from whipping him. "Treat him like a beast and he becomes one," she says. If we didn't already love Bess, we do now. (Notice how Bruto casually leans on the bars during this exchange.) We then reveal backstage that the Wild Man is actually Harry Houdini (Tony Curtis). In case we need help with that, a passing showgirl conveniently says, "Hi Harry."
This is all rooted in fact. Houdini did play "Projea The Wild Man of Mexico" during his tour with the Welsh Bros Circus in 1895. Harry and Bess were already married at this point and the Wild Man had nothing to do with a dime museum, but using the Wild Man here works wonderfully well and is one of the best examples of how Houdini builds its master narrative using select facts. No need to invent fictions when Houdini's real life provides such great dramatic clay. 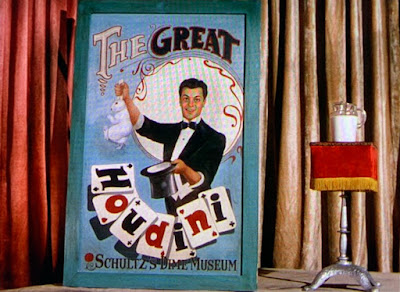 The girls now approach the platform for "The Great Houdini" (billing he never used, incidentally). Like the main title, this should send a thrill of recognition through any Houdini buff as the production took great care in bringing to life the famous photo of "Mysterious Harry" from 1897-8. Even the costuming matches -- note the loosely rolled up sleeves. No future biopic would attempt anything close to this level of accuracy and it's a treat. 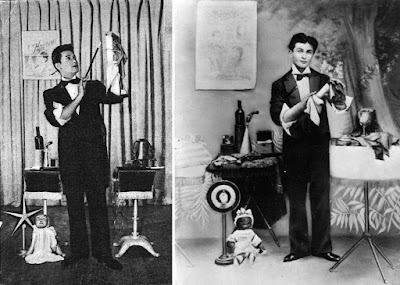 It's also worth pointing out that Houdini appearing in a dime museum is also entirely accurate. This was his bread and butter for many years. In fact, Houdini played dime museums so often he earned the nickname "Dime Museum Harry." As far as I know there was never a "Schultz's Dime Museum." Huber's located at 106 East 14th Street was Houdini's go-to dime museum in New York City.

While we're on the topic of the dime museum in general, this scene also contains uncredited appearances by Tor Johnson as a strong man; Marion Dempsey as the sword swallower; contortionists Audrey Washburn and Betty Yeaton are the Pretzel Twins; and little person "Mr. Bigger" is played by A.J. Buster Resmondo.
The Great Houdini begins his magic act with a milk pitcher trick. Here the movie establishes how it will present its magic. Tricks are performed by the real actors start to finish with few if any cuts. During these moments the movie very much stops and becomes a magic show. In fact, when I've seen Houdini with an audience they instinctively applaud the conclusion of each trick. The magic in Houdini is also almost all contemporary, or at least performed in a 1950s style. As far as period goes, Houdini has a light touch. It is filled with deliberate anachronisms, starting with Tony Curtis's hairstyle which is the actor's own. But all this is meant to keep Houdini a breezy entertainment for audiences of the day, and the anachronisms are likely not even noticed by modern audiences as the 1950s now seem pretty old-timey as well! 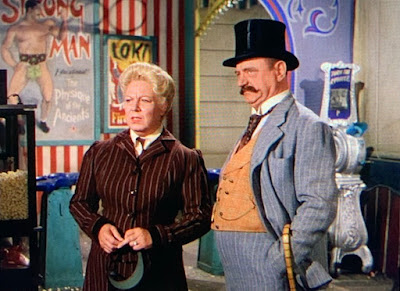 As the magic show continues, we take a beat with the sour Schultzs. Business-minded Mrs. Schultz (Connie Gilchrist) complains that the magic act "slows up the turnover." Mr. Schulz agrees, but says Harry has refused to play the popular Wild Man unless he's allowed to do his magic, thus establishing magic as Harry's true love. "That boy's got something," growls Mr. Schultz. "If only he'd forget the magic."
Of course, this is meant to play as high irony as Houdini will show Harry rising to the ranks of a Master Illusionist. But this beat actually reveals an inadvertent truth. Schultz's words echo the real life Martin Beck who famously advised Houdini to "drop the magic." Schultz, like Beck, can see Houdini is a natural with larger dramatics (such as the Wild Man) and that standard magic is not his strong suit. In fact, this movie suggests that Houdini's early struggles are largely due to his clinging to traditional magic instead of embracing his larger (and darker) destiny. Destiny and fate are huge themes of this movie as we shall explore. 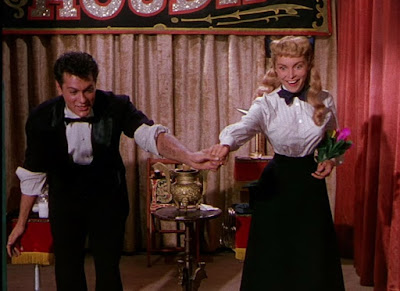 Harry now invites Bess on stage to assist in a trick (notice how he ignores the man in the front row who raises his hand -- funny). We now get a trick from the 1890s. In fact, it comes right out of Bess's own real-life recollections in Kellock. In the book Bess related how, shortly after their marriage, Houdini divined the name of her deceased father, Gebhard, from a burned piece of paper rubbed on his arm. (This actually terrified her and the only way Harry could calm her down was to explain how the trick was done.) Here we see the same trick, but this time Harry divines Bess's own name. Again, this is a beautiful way to use something from real Houdini history to create a fictional "meet cute" moment. The only thing that mars the scene is Harry's extended hand rubbing "vibrations" beat, which now plays as inappropriate and generally slimy.
Things then take a turn for the worse. As his act ends and Bess tries to leave the stage, the smitten Harry comes on a little too strong and good girl Bess soundly rejects him. 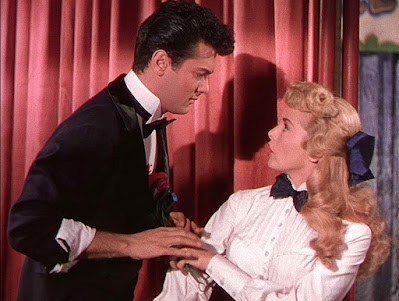 Looking to salvage the situation, Harry puts back on his Wild Man mask and re-approaches Bess out in the museum. However, the patrons think the Wild Man has escaped and pandemonium ensues. Harry is fired and Bess vanishes into the city streets. I like how Bess calls Harry a "Fake!" when he reveals he's the Wild Man, thus establishing that she, like Houdini later in life, is personally offended by fakery. I might also add that the real Bess did not care for dime museums, sometimes forcing Harry to perform in them solo.
As far as I know, Houdini was never fired from a dime museum, so there is no correlation to Houdini history here. But it's a great way to conclude the sequence. We love both these characters and can see they have chemistry. If only they could meet again... 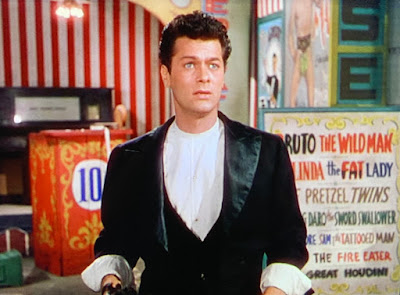