So my cat and I were watching Haldane of the Secret Service last night, and I completely forgot that Houdini shot a scene on the embankment beside Westminster Bridge in London. I've been to this very spot many times without realizing this. So for my friends in England and those traveling to London soon, remember, Houdini stood here.

Below are some more thrilling cities (that's a nod to Ian Fleming) from Houdini's Haldane of the Secret Service. Houdini shot these European locations while he was on tour in 1920. At the time, he only had a vague notion for a film about counterfeiting that he was calling The Dupe. These shots do feel somewhat sandwiched in just to give the film international flavor, but it's one of the pleasures of Haldane to see these famous cities captured in time.

UPDATE: So last night my cat and I were again watching Haldane of the Secret Service and I noticed something new in the location footage. In the below shot of a busy London railway station one can see an advertisement for the "International Horse Show" at the Olympic, June 16-28. That gives us a good idea of exactly when Houdini shot his London scenes. Houdini was in London at exactly this time. 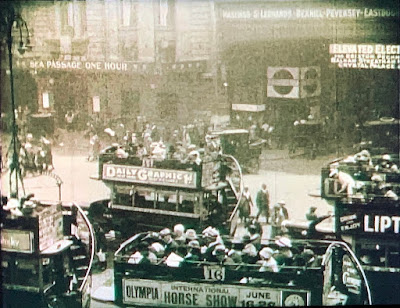