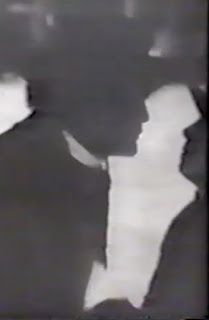 Earlier this year our friend Leo Hevia discovered 30 minutes of largely unseen Houdini footage buried in a YouTube video of random magic clips. It was an exciting find! A few weeks ago the clip and channel disappeared. It's still not clear who ran this channel, nor where this footage originated.

But this footage was just too remarkable to let vanish, so I've taken the liberty of uploading four of the most complete and interesting clips to my own YouTube channel. (Hopefully I'm not stepping on any toes by doing this.) I have also embedded the clips below along with a description of what they show. As you can see, the quality is poor, but the content is incredible. Enjoy!

1. Visiting sister Gladys: This appears to be unedited home movies of Houdini visiting his sister Carrie Gladys on a snowy day. After several shots outside of Houdini leaving the house (the footage is not in sequence), we cut inside the house to find Gladys playing the piano as Harry and Bess enter. Gladys then greets Houdini's assistants one by one: Franz Kukol, James Vickery, Jim Collins, and an unidentified assistant. Two more men are greeted by Gladys and Houdini, but I don't know who they are. After everyone leaves, Houdini returns to pick up and kiss a photo of his mother. We then see Houdini hugging and kissing Bess outside in the snow. Incredible.

2. Houdini Coin and Card handling: A real mystery is this one minute of footage showing Houdini doing coin sleights and card manipulations in slow motion. It's tempting to think this is a lost fragment from Velvet Fingers, but Houdini is dressed in a suit instead of a tuxedo, so this appears to be something entirely different. Whatever it is, it's a remarkable minute of film and breathtaking to watch Houdini's hand movements.

3. Monk Table Tie Escape: This footage shows Houdini doing an escape on the set of Haldane of the Secret Service. But this is not from the movie itself. The scenario here appears to be that he's being challenged by monks (played by actors and his assistants). This footage has appeared in documentaries, but it always cuts off as Houdini is being tied. Here the footage is complete and uncut, showing the full escape and Houdini being raised up on the shoulders of the ecstatic monks.

4. The Man From Beyond cliff stunt: While maybe not as spectacular as the above clips, this is every bit as interesting. This shows Houdini filming his cliff fight and his stunt of hanging off the edge. Shot from a distance, we can see the cameraman and also the geography of the stunt, showing Houdini was not as high off the ground as it appears in the movie. A rare piece of behind the scenes.

Also part of the original clip was the first few minutes of Houdini's 1909 movie, Les merveilleux exploits de Houdini à Paris. But this is something I'm going to save for a later time as part of a larger restoration project.