The bouncing beds of 278

In 1938 a ghostly phenomena was reported in Jonesville, Virginia, when the Sybert family claimed that the bed of their 9-year-old daughter, Bertha, would bounce uncontrollably whenever she was in it. Bertha also showed signs of possession. The press would dub her "Bouncing Bertha" and a bouncing bed would later appear in The Exorcist. You can read more about "The Legend of Bouncing Bertha" HERE. 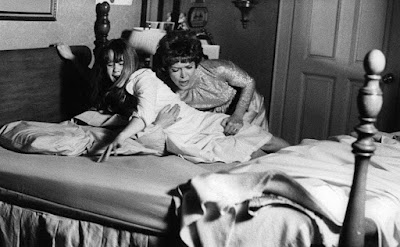 In December a reporter asked Bess Houdini about the Virginia phenomena and, as you'll read below, she dismissed it as "bunk" (others would eventually come to the same conclusion). But what I really like about this article is Bess's description of bouncing beds and other trickery inside her former home of 278.
Houdini's bed survives today in the collection of Jon Oliver. No reports of bouncing.
Related:
Written by John Cox at 8:35 AM