The haunting of Houdini's 278 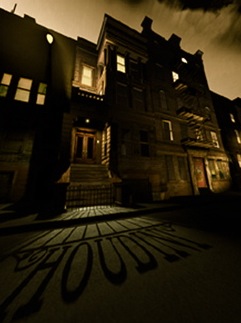 In 1927, Bess Houdini sold the house at 278 West 113 Street to her neighbors, John and Filippina Bonanno. The Bonanno family owned 278 for the next 53 years, with their daughter, Rose, occupying the house until her death in 1979.

Recently I found this incredible article about how the Bonanno family believed the house was haunted. This appeared in several newspapers in late October 1949. The following clipping is from the Hartford Courant:

That year Joseph Dunninger held his annual Houdini seance inside 278 (it was Dunninger who started the annual seance tradition in 1947). During the midnight proceedings there was a curious incident, as reported the next day by The Evening Sun:


The Bonannos weren't the only ones who claimed contact with Houdini inside 278. Mr. Wilkes, who lived in the house alone during the 1980s, said the spirit of Houdini was a regular visitor. This is according to Dixie Dooley who spent a stormy evening inside 278 with Mr. Wilkes in 1985. Wilkes told Dixie: "He'll educate you too, he's educated me!"

Fred Thomas, as far as I know, made it through his 26 years in the house spirit free.

Last week came the news that 278 now has new owners. Might they find themselves dreaming of Houdini? Or maybe a plaster dog with one ear?