Over the holidays our friend Benjilini, magician and author of Benjilini on Houdini, gave a talk at the historic Park East Synagogue in New York City, which remembered their "most magical member" with a special Shabbat Chanukah Dinner on December 23. Today Benjilini provides us with a full report of what sounds like a magical evening. 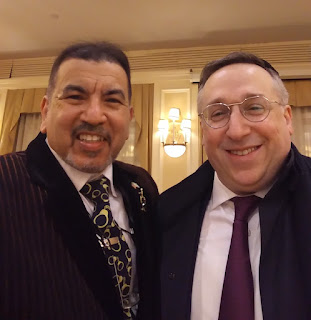 On a bitter cold and stormy day, I arrived by a car service to the Park East Synagogue located on 163 East 67th St. in Manhattan, NY on Fri., Dec. 23rd for my Houdini presentation at 1pm.

I was escorted into the building thru a security check point. Cantor Benny Rogosnitsky was so excited to see me! With a huge hug he told me, "I know you are going to do a great job, "Benjilini on Houdini!"

Cantor Benny's assistant immediately handed me my payment for the evening. She took me downstairs to their main Ballroom to set-up my display on a long table and provided me with easels which I requested from them.

After my set-up, I took a photo and recorded a small 2 minute video. Cantor Benny took a photo with me and was quite pleased that this program was on the site of John Cox WILD ABOUT HARRY who he apparently knew.

I walked the 18 blocks to the San Carlos Hotel to drop off a few things. My room was 4 stars! I was very surprised by this huge room because I would probably, like Houdini, only be asleep for about 3-5 hours on my return after the event in the evening.

I returned to the Synagogue for the outdoor and indoor Chanukah candle lighting. We prayed in the wonderful 1890 Huge landmark Synagogue followed by a most tasty Sabbath meal along with the close to 100 people for this sold-out event.

Many people went to my display table, as I stood by my Houdini pieces to provide much additional information. Finally, after my introduction from Cantor Benny, it was my turn. After much discussion about the close relationship between Houdini and Rabbi Bernard Drachman (1861-1945) who began his relationship with Houdini during his Bar-Mitzvah in 1887 until Houdini's passing in 1926, I allowed a few people to come up and speak about Houdini. 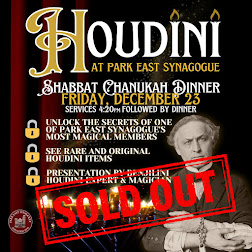 A Rabbi who knew Rabbi Drachman's son's before their passing told the audience a story that was not mentioned in Rabbi Drachman's book. After Houdini donated a sum of $500 to Rabbi Drachman in order to receive his father's set of Maimonides books the story continues. Here is something new about Houdini that was NEVER mentioned in any book including mine as well. Some years after the event, the Park East Synagogue had a huge leak within its building. Houdini payed the entire amount for its repair and provided the final payments to complete the mortgage of the Synagogue. So, the historic Park East Synagogue stands to this day thanks to Jacob Weisz who later became the legendary Harry Houdini!

Most speakers would never allow three other people to come up and interject and speak at the podium. By doing this, we heard from a licensed Doctor that there was no effective antibiotics to treat Houdini's bursted appendix back in 1926 along with the story above. Also, the President of this Synagogue is responsible for closing the streets by the Machpelah Cemetery where Houdini is buried located in Glendale, Queens on Halloween to keep away those who continually come there on that day to create mayhem and chaos.

After displaying certain pieces, I performed three magical effects. A metallic circle created by Juan Mayoral back in 2001 transformed into the "Star of David." I provided a wonderful introduction before I placed handcuffs on Cantor Benny who hired me for this historic event. After he could not escape, I had him place the handcuffs on me but behind my back. I quickly and thankfully, escaped from these handcuffs as "Houdini." However, my original "Chanukah Dreidel Enlargement" effect, whereas, the small dreidels are transformed into 10 times their original size but now filled with candy using the only two young girls that attended this Sabbath dinner, created a loud and huge applause!

From the ending of that presentation until I left on Saturday evening from the Synagogue about 30-50 people continued to stop me and say, "I enjoyed your entire presentation!" "Why?" "It was 'genuine' on your part. You clearly showed your love for Houdini but your magic tricks are fantastic!"

With a great program, great prayers, delicious food, wonderful accommodations at the Hotel, it was hard to say, Good-Bye. Cantor Benny told me before leaving on Saturday night, "Benjilini on Houdini, you did not just perform a great program as everyone is talking to me about it, YOU hit it out of the ballpark!"

I stayed very calm throughout the entire weekend. I do not know why their response to my entire presentation was so highly effective? However, I have found a new mission. I must provide many additional Houdini lectures with combined magical effects performed by me. I pray to the Almighty, for the Park East Synagogue to rehire me for many future events. I pray to the Almighty that our magical organizations, etc. will recognize my talents and hire me to present these lectures on Houdini as well as having me perform too in 2023 and beyond. I feel it is my TIME! -Benjilini 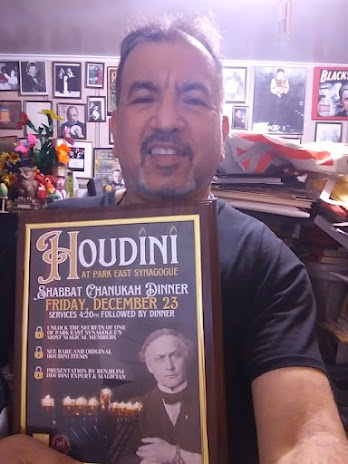