Meeting the Collector at Muzeo 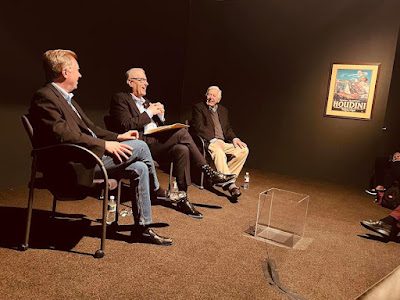 On Sunday I had the pleasure of being a part of Muzeo's "Meet the Collector" event with Dr. Randall Bell and John Gaughan. It was standing room only and everyone seemed to really enjoy the day. Dr. Bell gave a guided tour of the Houdini Unchained exhibit, telling stories of how he acquired many of his treasures. It was also a thrill to hear John Gaughan describe the workings of the flower table. We had a very lively Q&A and there was a lot of love for Houdini in that room.
Also in attendance was our friend Joe Notaro of HHCE, historian Diego Domingo, mentalist Nader Hanna, magician David Minkin, and magician Jessica Jane Peterson who didn't let two broken ribs (acquired doing a straitjacket escape) stop her from attending! She's also responsible for the photo above.
This was the closing event for Houdini Unchained: The Life and Legacy of Harry Houdini at Muzeo. However, the good news is Dr. Bell announced the exhibition will be traveling. The next stop is yet to be announced, but you can count on hearing the news here when it is.
Thanks to everyone who came out on Sunday!