Our friend Benjilini, magician and author of Benjilini on Houdini, provides us with a full and heartfelt report on this year's annual Broken Wand Ceremony at Houdini's grave. 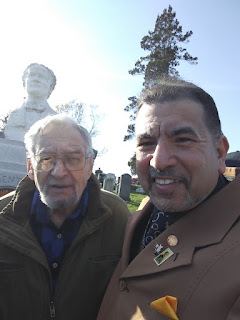 On a brisk windy day with 40 degree temps., Rich Cohn picked me up with his heated car at 11:30. We went to pick up our Dean of the Society of American Magicians (SAM) and my friend of over 30 years, 93 year old George Schindler. Although, George does not drive anymore, his directions to the cemetery was better than any GPS dashboard.

We arrived at the Machpelah Cemetery off the Jackie Robinson Expressway on Exit 3-Cypress Hill St. Once again, the gate was locked as we as well as others waited patiently for someone to unlock the heavy lock. Dorothy Dietrich came to our car and said, "I could probably pick that lock but I don't want to be arrested." George said, "Houdini could escape but now they keep him locked up." I was laughing with his keen sense of Jewish humor.

A few people cleaned up the gravesite of Houdini before the Ceremony. We purposely perform the SAM-PA#1 HOUDINI ANNUAL BROKEN WAND CEREMONY on his Hebrew date of death (Yahrtzeit) due to those individuals who continue to come on his English date of death on Halloween and leave weird things on his headstone which is disrespectful. Also, in the past, many strange individuals would attend the service on Halloween dressed as witches, etc. Now, for some years, it is held on its proper Hebrew date which is the 23rd day of the Hebrew month called Marcheshvan in a dignified manner.

Some of our members visited Larry Weeks gravesite before the Broken Wand Ceremony. We noted the the 2 new markers for C. Gladys Weiss and for Dr. Leopold Weiss, sister and brother of Houdini renewed thru Dorothy and Dick and, I believe, the SAM Endowment Fund. Devlin displayed a beautiful model of the Houdini family plot with proper gravesites in order which included the exedra, the weeping woman, and the red colored SAM symbol on the 1916 exedra. I noted how Theordore Dash Hardeen's gravesite had the wrong date of birth on his marker to proclaim he was born on a leap year (Feb. 29th). Also, Dorothy provided a story concerning the life of a fallen soldier, Mr. Wolf, by his marker signifying his death in WWII near the Houdini family plot. She wants to repair that area as it was damaged during the erection of the Houdini plots. 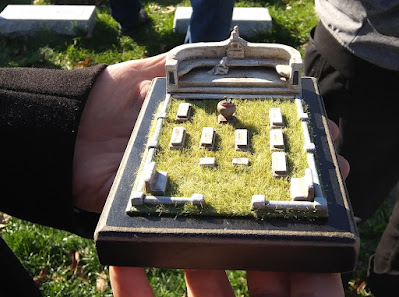 We gathered on the exedra and a gentleman from The Polar Bear Club took many photos of us along with Mark Mitton. We had a huge crowd of 15 or more for the ceremony. George had me break the wand created with the wooden lath from Houdini's renovated home on 278 created by Barry Spector for me to use that day. He sent it to me and demanded of me to take its broken pieces home on this 96th Yahrtzeit for our compeer Houdini. As usual, I discussed the amazing things concerning Houdini's family gravesite e.g. the mausoleum on the back bears the name of Appleton. Appleton, WI was the early home of Ehrich Weisz when he immigrated to America back in 1878 at the age of 4. Houdini was able to have a bust of himself erected on his huge exedra which is not allowed in a Jewish cemetery as no graven images is permitted. Also, the headstone in front of the family plot bears the name Meyer Michael. Michael Mayers is the homicidal knife bearing killer in the old film called Halloween. 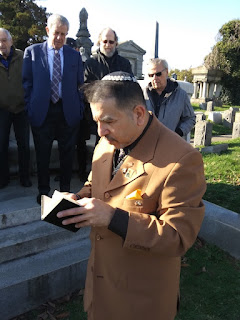 I led the Hebrew part of the service with its English translation. Training as a child from my mom, Nechama Mindle Mildred R.I.P., taking me to family members gravesites, Rabbi Noah Valley R.I.P, who conducted the Broken Wand Ceremony for many decades, and our living Dean of the SAM George Schindler allows me to perform the service with much respect and tears. Having 10 Jewish males, I was able to conclude the ceremony with the Mourners's Prayer called Kaddish. Many of our fellow compeers after the ceremony shook my hand and told me, "I was very touched for the way you led the service. I want to thank you."

11-12 of us gathered at a historical German restaurant called Zum Stammtisch. Being kosher, I enjoyed a nice beer while my fellow compeers enjoyed many delightful dishes which included some tasty cabbage too. The stories, the laughs, the camaraderie is what makes us a close fraternity. Past President Bob Braun told me "he would nominate me to be a future 2nd Vice President" as I would be honored to be a future President of our SAM-P.A.#1 Assembly. Time will tell?

I spoke to the owner of the restaurant for about 10 minutes. He truly appreciated my kind words of the beautiful architecture, the shining wooden interior of this historical German restaurant and, of its kind and highly professional staff. He appreciates us coming there for many years. He shook my hand with much kindness.

We concluded this special gathering with an anonymous fellow member presenting me some additional gifts as prizes for my kids at cpnyc.org. Rich Cohn drove George and me home. I still had tears in my eyes after the event at home thinking about my friend, George. May the Almighty One protect us with many additional years of good health, peace and wealth to be used to bring our "magic" to others and, hopefully, to ourselves as well. 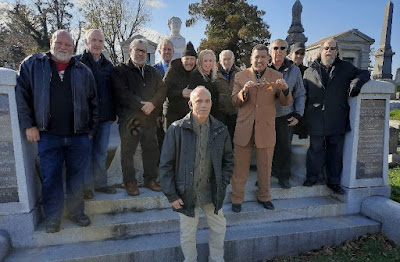