Houdini's Fabulous Magic is BACK

After being out of print for more than 40 years, today sees the re-release of Houdini's Fabulous Magic by Walter B. Gibson and Morris N. Young. This new edition includes a Forward by Gabe Fajuri of Potter & Potter auctions and is published by Vine Leaves Press. 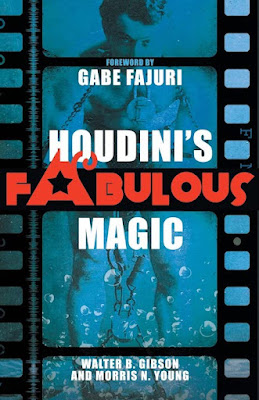 Incredible escapes, fantastic sleight-of-hand-Houdini's most challenging performances are dramatically portrayed in Houdini's Fabulous Magic. Walter Gibson, co-author, was in close touch with Harry Houdini for a number of years before his death and worked with the master magician in preparing material for the book. It is with the aid of Houdini's own scrapbooks and notes that this book was written.

The spectacular highlights of Houdini's career are described-and explained-here. Included are the famous escapes: escapes from a padlocked milk can filled with water; from locked jail cells; from a water-filled Chinese torture cell while suspended upside down; from packing cases weighted under water. Again, in this book, Houdini walks through a brick wall, vanishes a 10,000-pound elephant and is buried alive. Once more, Houdini and his wife Bessie mysteriously exchange places in a locked trunk-in three seconds!

And Houdini the man is not ignored. His impact on the world in the early years of the twentieth century was enormous. He was a public hero who, in his own way, helped sweep out the cobwebs of nineteenth-century thinking. While doing so, he distinguished himself as a patriot, writer, collector of magic, aviator, movie idol, philanthropist, and crusader against fraudulent spiritualistic practices.

This is a technical manual for magicians, complete with illustrations and diagrams, but it is also an astute analysis of the best of Houdini's magic and a readable biography of a man who turned himself into a legend. It is a book for would-be conjurers, for professional necromancers, for those curious about the methods and means of one of the most enchanting men of our century.

I've always loved Houdini's Fabulous Magic and I'm excited to see it return to print. You can check out my overview of the book and its publishing history HERE. I haven't seen this new edition in the flesh yet, but I'm excited to get it. I've shared some of the publishers promotional material on Patreon.
Purchase the 2023 edition of Houdini's Fabulous Magic at Amazon.com and Amazon.co.uk.