Hardeen's Tramp Chair to be displayed at Oakfest 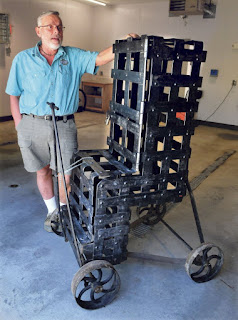 The original "Tramp Chair" that Theo Hardeen escaped from in 1913 will be displayed at the upcoming Oakfest in Oakland, Maine. Who even knew the chair still existed!

The Morning Sentinel reports that the "so-called tramp chair" is about 800 pounds of steel and stands just 52 inches high. The chair is housed at the Oakland police station where Gary Bennett, owner of Snow Pond Cruises and Historical Tours, said it always raises a lot of interest during his tours. He thinks the lock on it today is the original lock that was used in the early 1900s, as the historical society doesn’t have a key that opens it. The chair is just one of two in known existence from the dozen or so made. 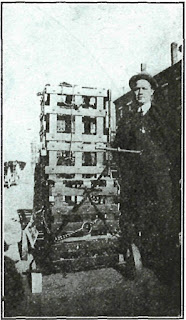 Hardeen escaped from the tramp chair on Tuesday, December 10, 1913 at the Bijou Theater in Bangor, Maine. He was shackled and locked in the chair by a committee from the Bangor City Department. He escaped in 11 mins. Afterwards he told reporters, "I saw the shackles were strong and old-fashioned, not at all like anything I had every tried to get out of, and I knew I would be bothered considerably by this new sort of imprisonment. But I found it easier than I expected. Nothing gave me much trouble but the Yale Lock."

Hardeen was proud of this unique challenge. He printed the full newspaper account of the escape in his pitchbook and also featured it on a poster.

A police cruiser will carry the chair in the OakFest parade at 6 p.m. on July 21. It will then be displayed in a tent during OakFest, July 21-23. The chair is currently available for viewing at the police station during business hours.

For more information on Oakfest visit the official website. You can see more images of the tramp chair HERE.

UPDATE: In the book Houdini's Escapes and Magic by Walter B. Gibson, it's said that Houdini also escape from a Maine Tramp Chair in Boston. Except he called it a "Witch's Chair." It's not clear if it was the same chair here.