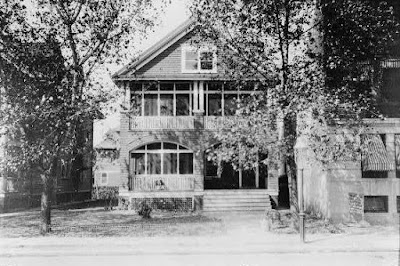 One hundred years ago, Houdini returned home after an exhausting seven month coast to coast Vaudeville tour. But the New York home he returned to was not his famous brownstone at 278 W 113th Street in Harlem. It's not generally known, but Harry and Bess Houdini lived in Flatbush for 3 1/2 years between 1914 and 1918. In fact, it was in this Flatbush house at 394 East 21st Street (pictured above) that Houdini produced what today might be considered his single most important surviving artifact, but I will get to that.

When Houdini purchased his Harlem brownstone in 1904, it was to serve as a new Weiss family home and, primarily, a new home for his mother. At the time, Houdini was performing in Europe and only returned to New York for short periods. As a family home, 278 saw a steady rotation of resident Weisses (and Rahners). Houdini's brother Leopold even set up his radiology practice in the parlor.

When Cecelia Weiss died in 1913, Houdini was devastated and reportedly didn't like the memories that came with the house. At least that's the official story. Jon Oliver, who spoke with Harry Hardeen Jr., claims the real issue with 278 was that mama's corpse had been left inside the house for the week it took Houdini to return from Europe, and it had become uninhabitable (and unsellable). Whatever the truth, Houdini felt the need to escape.

Houdini's brother Dash, who performed as Hardeen, had purchased a home in Flatbush in 1912. Hardeen's pitchbook identified the address as 394 Kenmore Place, but in reality it was located at 394 East 21st Street. However, it was more house than Dash required (or could afford?) and in July 1914 he put an ad in the Brooklyn Daily Eagle looking to sublet the top floor: 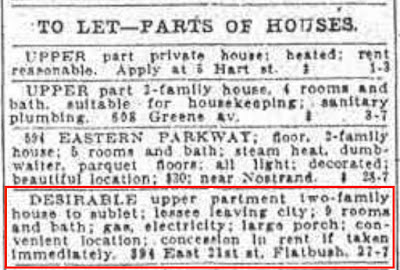 The tenants Hardeen ended up with were the Houdinis. Houdini moved to 394 East 21st Street in September 1914. On his new stationary (rimmed in black to show he was in mourning) he wrote to a friend: 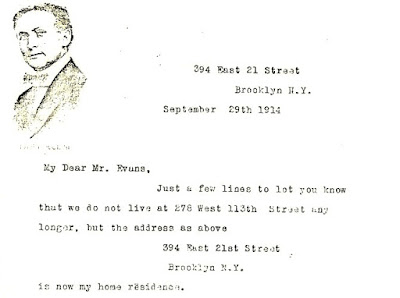 The Flatbush house became the hub of activity during the years Houdini was land-locked in North America because of the war in Europe. It was during his time that Houdini began to build what he hoped would be one of the world's greatest dramatic collections, and the mounds of new material he acquired flooded into Flatbush. When Houdini met Harry Kellar in 1916, he invited him to the house where he showed off his collection and also amazing the great magician (according to Kellar himself) with card magic.

But it was on October 29th, 1914, that the Flatbush house became the sight of what might arguably be the single most important Houdini artifact of them all. It was here that Houdini used an Edison wax cylinder phonograph to record his voice, now the only recording of Houdini's voice in existence. While I can't say conclusively that he made the recording in the house itself, he identifies his location as "Flatbush, New York" and his sister Gladys is with him, so I'm thinking it's likely this was done at home.

The Houdinis (and, presumably, their many pets) lived on the top floor of 394 while the Hardeens (and their children) lived below. Was living in such close quarters a strain? Possibly. In his book, Houdini!!! The Career of Ehrich Weiss, Kenneth Silverman identifies a few cryptic references in Houdini letters and diaries that suggest tension. "I do not like atmosphere re certain things in Flatbush" Houdini wrote to Oscar Teale. And when Houdini was honored at an S.A.M. banquet, he noted curtly in his diary: "Dash and Elsie did not wish to go."

The shared residence also caused some amusing confusion. When Hardeen was arrested for speeding, the Brooklyn Daily Eagle reported that it was Houdini who received the $25 fine. The paper later printed a retraction, quoting Houdini himself as saying that he had "never been arrested nor fined, and does not drive a motor car." 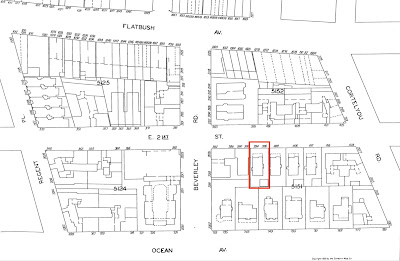 Harry and Bess moved back to 278 in February 1918. His magic and drama collections alone filled six moving vans. Some of the papers mistakenly reported that Houdini had recently bought the house. Houdini transferred legal ownership of 278 to Bess on July 22, 1918. He would go on to make 278 the home that it really never was to him before.

Hardeen moved out of 394 in 1921, relocating a few blocks to 537 East 21st St. This would be the home he and Elise would live out the remainder of their lives.

A very big thanks to Bill Mullins for his invaluable help in locating Hardeen's house and for the Brooklyn Eagle classified ad and map.

Also thanks to Joe Notaro of Harry Houdini Circumstantial Evidence and Jon Oliver. The Houdini Flatbush letter is reproduced from the collection of James Crossini on page 29 of The Illustrated Houdini Research Diary, Part 4: 1911 to 1915 by Frank Koval.