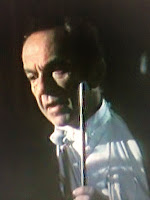 Comedian Jack Carter has passed away at age 93. Carter was a popular television star who made more than 50 guest appearances on The Ed Sullivan Show. He also directed episodes of Here's Lucy and appeared on Broadway in such hits as Oliver! and The Odd Couple.

But for Houdini fans, Jack will be remembered as the first actor to portray Theo Hardeen on film. Carter played Houdini's brother in the 1976 television movie The Great Houdinis opposite Paul Michael Glaser.

Below is a clip of Jack Carter's one scene as Hardeen. I enjoy this. Carter nicely plays both his comedic and showbiz savvy sensibilities. I also like his references to almost drowning in the Milk Can and Walking Through A Brick Wall (both true). And we meet Daisy White played by Adrienne Barbeau.

You can read Jack Carter's full obituary at The New York Times.