Houdini learns the title of his movie

Eric Colleary of the Harry Ransom Center in Austin, Texas reports that there is currently a major re-cataloging of their Houdini archive underway. Among the center's massive holdings are many of the business papers related to Houdini's film work, and today Eric shared this gem on Kevin Connolly's Conjuring History Facebook group.

Houdini's first Hollywood production for Famous Players-Lasky Paramount was for a time called Circumstantial Evidence. This letter from Jesse L. Lasky dated May 24, 1919 informs Houdini that a consensus has been reached on a final title. It was actually a return to one of the first titles suggested by writers Arthur B. Reeve and John W. Grey. Looks like Houdini did not object. 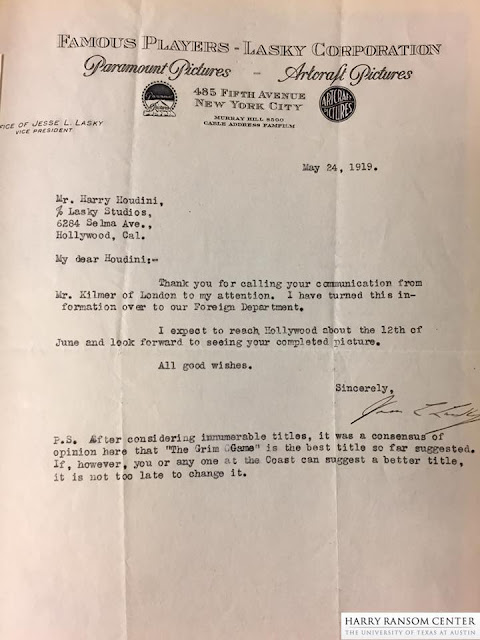 As you can see, Lasky sent this to Houdini care of the "Lasky Studios" in Hollywood. It's too bad he didn't send it to the address where Houdini was residing, as it might have finally given us the "smoking gun evidence" that Houdini was living in Laurel Canyon at the time. Perhaps the re-cataloging might finally reveal that evidence?

The Harry Ransom Center recently screened The Grim Game and displayed items from their collection to mark the 90th anniversary of Houdini's death. Check out their official website.

Thanks to Eric Colleary and Kevin Connolly.

While we're on the topic, check out my new standalone page devoted to Houdini's Movies. I'm slowly building up standalone pages like this that can be accessed from the main menu bar. Just a way to help make the site more navigable.
Written by John Cox at 11:32 AM