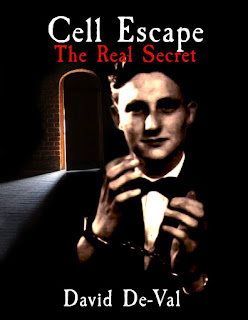 Here's something very exciting for those who are interested in learning the secrets behind Houdini's amazing feats.

During his career, escapologist and magician David De-Val visited and/or escaped from all of the surviving jail cells in the UK that Houdini escaped from. In doing so, De-Val claimed to have discovered Houdini's secret. In 2000, he recorded his exploits and findings in a privately printed book called Cell Escape - The Real Secret, which is a rare collectible.

Now Allan James Taylor and Rebecca De-Val have released a "new and improved" edition with all the original content from the 2000 edition along with new images and information. The first batch sold out immediately, but more are in stock and can be purchased now from the David De-Val Tribute website store.

“…I extensively researched Houdini’s seemingly supernatural escapes, concentrating for a period on his remarkable jail cell escapes. Many authors have put forward theories. Believe me, none have even come close to the real secret! I personally visited the jail cells in England from which Houdini performed his escapes all those years ago. Their locations were drawn from contemporary newspaper accounts made by the reporters who actually witnessed the stunt being performed. And very detailed they are – most running into many column inches. After four years of almost weekly study, at last I had his closely guarded secret! I set about proving this by duplicating his naked cell escapes at every opportunity…” - David De-Val.

Thanks to Allan and Rebecca.