The Ehrich Weiss Bible is in The House

The recently unearthed "Ehrich Weiss Bible" is now part of The House of Houdini museum in Budapest, Hungary. The Bible was delivered yesterday by musician Tara O'Grady whose family owned the Bible for some 38 years. The arrival was heralded by a major press event with dignitaries. Later that evening, Tara performed in concert with Hungarian jazz musicians including Attila Korb.

Below is a terrific shot by Richard Velasco of museum founder David Merlini and Tara with the museum's newest addition. 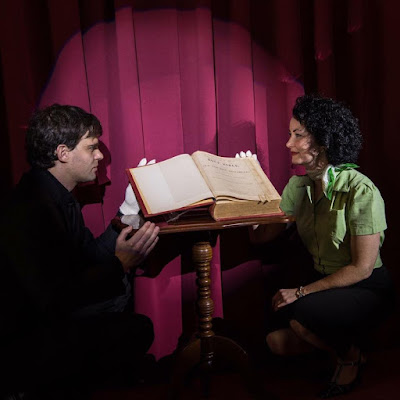 The Bible, which is signed by Houdini's father Rabbi Weiss and by Houdini as "Ehrich Weiss" in 1893, came to Tara's family via the nurse of Houdini's brother Dr. Leopold Weiss. It's a wild story that Tara first shared HERE.