Potter & Potter's "The Golden Age of Magic Posters, Part II" auction is set for February 4th, 2017. The just released catalog includes several Houdini posters. The most significant of these is a 1912 poster for his Water Torture Cell. This is one of only three know examples. Auction estimate is $50,000/80,000. 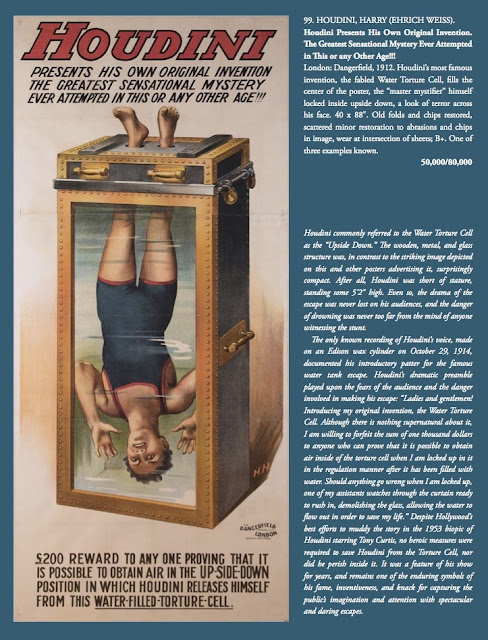 I can't help but correct this listing in one regard. It describes Houdini as being 5'2". According to a 1926 physical, Houdini stood 5'5.276". Why do people keep trying to shrink him?

Also at auction is a King of Cards poster, a playbill for Houdini's Grand Magical Revue, two Hardeen posters, a poster for Brindamour (described in the catalog as "Houdini’s most successful competitor"), and a nice poster depicting Nicola in several Houdini-like escapes. 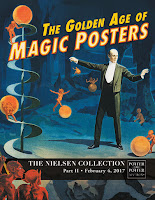 All the posters in this auction came from the collection of Norm Nielsen. Norm also owned what I believe is the only surviving poster for Houdini's Overboard Box escape. Word is that poster was sold privately.

The Golden Age of Magic Posters, Part II catalog can be downloaded as a free PDF or purchased in hardcover from the Potter & Potter Auctions website.