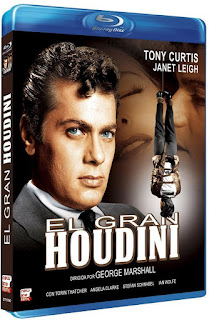 It's becoming clear that the DVD market is drying up, and this is distressing for Houdini buffs as The Grim Game and Houdini & Doyle have yet to appear on any physical home format (in the U.S.). So it might be a good idea to shore up the collection before it's too late. Recently I had a look at what's available internationally, and in doing so I found some curiosities.

For starters, check out the Region Free Spanish language Blu-ray of the classic Houdini (1953) with unusual cover art. The photo of star Tony Curtis is actually from a different film. The image of him suspended in a straitjacket is from Houdini, although I've never seen this image in color.

Another oddity is an Italian Blu-ray that combines the 2008 film Death Defying Acts with the 2006 movie The Illusionist starring Edward Norton. (Notice that in international markets the name HOUDINI was added to the title of the film.) There is also an Italian Magic 3 pack which includes the 2009 film Dorian Gray, which is really pushing it as far as a magic theme is concerned. Death Defying Acts has yet to appear on Blu-ray in the U.S. (and probably never will). 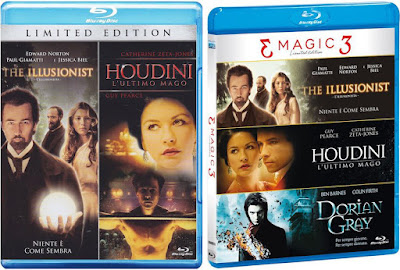 Finally, here's the artwork for a Japanese DVD for Houdini (1953). It's funny how they've used the exterior shot of Tony Pastor's Theater and just left the "Tony" visible. But notice how this cover doesn't depict any magic or escapes. Heck, it looks like it could be a musical! 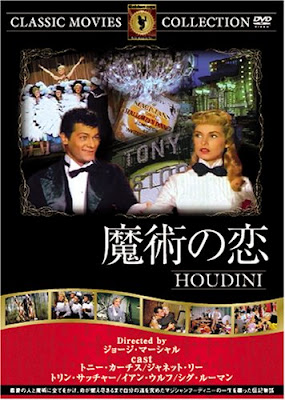 The latest DVD and Blu-ray release of Houdini (1953) in the U.S. is by Olive Films. Might it be the last?