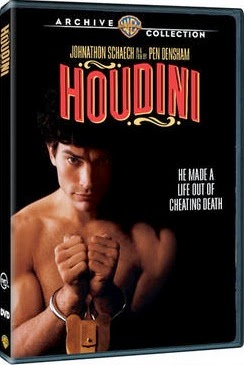 Houdini stars Johnathon Schaech as Harry, Stacy Edwards as Bess, and Mark Ruffalo as Theo (Hardeen). It's a traditional biopic (yay!) with outstanding production values. Houdini was written and directed by magic buff Pen Denshem, who also produced the 1979 documentary, Houdini Never Died. You can read my full review/overview of the movie HERE.

Houdini was released on VHS by Warner Home Video in 2000. This marks its first appearance on DVD.

Thanks to MSW for the tip.
Written by John Cox at 9:46 AM