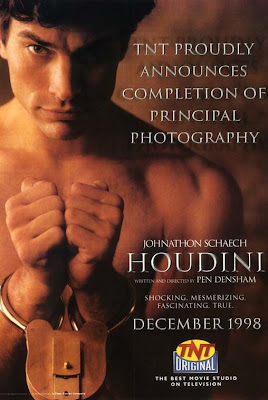 On Sunday, December 6, 1998, writer/director Pen Densham (who produced the 1979 documentary, Houdini Never Died) realized a dream when his cable film HOUDINI aired as a “TNT Original” movie. The film was supported with strong advertising, making the broadcast a cable television event. The network even broadcast two “encore” presentations immediately after the debut.

HOUDINI, which was filmed under the title, Believe, stars Johnathon Schaech as Houdini, Stacy Edwards as Bess, and Mark Ruffalo as Theo (Hardeen). Shimada also makes a cameo appearance as a street magician. Production design is magnificent, as is the musical score, and while not the best of the Houdini biopics, it has much to recommend it.

Notably, HOUDINI is the first Houdini biography to tackle and dramatize the issue of Houdini’s egotism. Certainly in this way Schaech’s manic and abrasive Houdini is far different from Tony Curtis or Paul Michael Glaser. Of course, it also makes him less likable and more alienating. But as Bessie says in the film, “I fell in love with Ehrich Weiss. I put up with Houdini.” 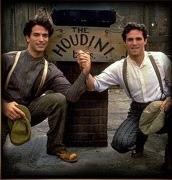 While Houdini takes plenty of dramatic license (Houdini’s mother never kissed or held him?), it still does a good job of weaving in Houdini history. It's the first Houdini film to give an accurate account of how he and Bess met. In HOUDINI we see them come together as fellow performers; Bessie as part of the Floral Sisters and Harry performing with brother Theo as The Houdini Brothers (okay, they were “The Brothers Houdini,” but that’s a quibble). We also get to see the death bed promise young Ehrich makes to his father. Jim Collins (Karl Makinen) and Martin Beck (George Segal) play their critical rolls in Houdini’s life and career. Even Houdini’s authorship of The Unmasking of Robert-Houdin is given a mention.

Hardeen gets a larger role in HOUDINI than he's ever had in any biopic. But as with Houdini's relationship with his mother, the filmmakers twist the brothers relationship for their own dramatic needs. Here Houdini creates "Hardeen" as a way to repress his brother's own magic ambitions. "It would be just too confusing; two Houdinis," Harry tells him. This film also sets up a class division between the two, with Houdini performing before royalty and Hardeen performing at a Union Hall. But it is nice that part of the dramatic arc for Theo in this film is to forgive his older brother for stealing the spotlight, and it's effective when he "exposes" the final Houdini seance just as Bess is starting to believe. 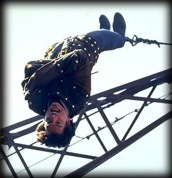 The film starts to get somewhat loose in its history in the final third, with Houdini suddenly ensconced in a throne-like office space and, yes, failing to escape from the Water Torture Cell after being punched in the stomach. The great Hollywood myth of the USD contributing to Houdini’s death continues here. Unbelievable.

But the film keeps the pedal to the metal in its depiction of Houdini’s stunts, eager to show Houdini as the original king of “extreme” (is that still a thing?). Standouts are the suspended straightjacket escape and a rather flamboyant depiction of the Milk Can. Jim Bentley and Jim Thompson are credited as magic consultants. 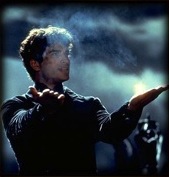 The framing device for HOUDINI is a live radio seance. This is presumably the 1936 final Houdini seance which was held on the roof of the Knickerbocker Hotel in Hollywood. Here it is presented on a theater stage, probably for budgetary or production reasons. Oddly, the film climaxes with Houdini making a star-child-like return from the dead. It’s a bit off the reservation, but it’s well written and beautifully performed, and does give the movie an emotional and, yes, magical conclusion.

Densham explains his ending by saying, “Well, you can look at it three ways: Either he dreamed it, or she dreamed it, or it really happened. I have my own theory, but I’d prefer not to say.”

HOUDINI was released on VHS

in 2000, but it has yet to appear on DVD. While Death Defying Acts was released in 2008 making it the most recent Houdini film, HOUDINI was the last straight-ahead biopic of the great magician. Let's hope it isn't the last.