Here is the entire 1979 documentary Houdini Never Died. This was produced by John Watson and Pen Densham who later wrote and directed TNTs Houdini. It intercuts Houdini's story with footage of contemporary magicians including Doug Henning. It also has nice footage of James Randi performing a suspended straitjacket escape over Niagara Falls, and the 50th Anniversary Official Houdini seance held at the Houdini Magical Hall of Fame. Definitely a product of its time, but that's what makes this great.

Houdini Never Dies was released on VHS by Brighton Video in 1987 (it can still be found on Amazon). I suspect this is the source of the YouTube video. I have no idea if the YouTube user has the copyright, so you might want to watch this one before it disappears. 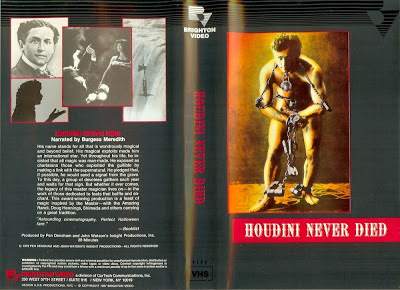