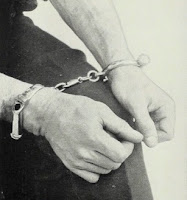 Houdini had a long hard road to success. But along that road he developed all the aspects that would eventually make him a superstar; Metamorphosis, the challenge handcuffs act, police station challenges, the straitjacket escape, even exposing fraudulent mediums.

But having mastered his performance, in 1898 he found himself sliding backwards. He had given his all in a string of failed tours with outfits like the American Gaiety Girls, the California Concert Company, and the Marco Co. Now he and Bess rejoined to the Welsh Bros Circus, going back to where they had effectively started in 1895. Houdini's diary entries for this period reflect his depressed mood. He records that the last two weeks of the tour "felt like an eternity."

After their circus engagement ended, the Houdinis returned to New York and Harry put his act up for sale in a self-published catalog of magic. Even that failed. In December, he set out to play engagements at the Dime Museums he had worked as a teenager. It's interesting to note that Bess does not appear with him during these late 1898 dates. Did she quit and had remain home in New York? It's possible.

And then came the night of January 11, 1899 at Middleton's Clark St. Dime Museum in Chicago, which I can only think was Houdini hitting his lowest point. The next day the papers recorded the event. 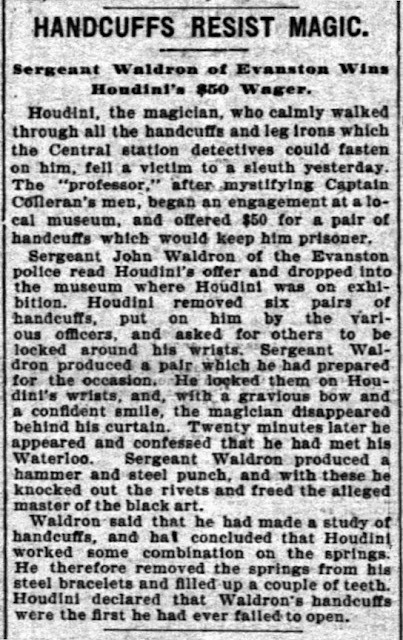 Houdini attempted to spin the incident as an "unfair test", but a failure was a failure and it must have devastated him. Luckily -- or unluckily -- at this stage in his career no one seemed to notice that the Handcuff King had been bested.

But the old saying "it's always darkest before the dawn" seems to apply here. Just two months after this embarrassment, Houdini would be discovered by Martin Beck and was on his way to fame and fortune.

Many biographers say this incident is where Houdini learned to always test handcuffs before an escape, and that he would insist all handcuffs be regulation. But there's evidence to the contrary. Later that same year, Houdini again became stuck in a pair of doctored cuffs. (He was able to free himself from one side and did the rest of his act with the cuffs dangling from one wrist.) He also did not always refuse doctored or non-regulation cuffs. When he discovered a pair of cuffs had been tampered with, he would inform the audience exactly how the cuffs had been rigged to defeat him, but that he would try them anyway if they would grant him extra time. This was a terrific bit of showmanship which certainly got the audience on his side.

Stay tuned for another tale of an on-stage embarrassment; one that I've never heard of before and was painful in more ways than one!