Today marks the anniversary of Houdini's death on Halloween 1926. But instead of my usual post about his death, this year I thought I'd offer up a remarkable new story from his LIFE. Enjoy. 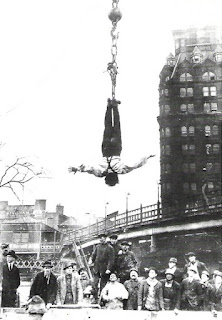 Despite the general perception, Houdini did not perform many outside stunts in New York City. Unlike other cities, the police would not tolerate the massive crowds and snarled traffic. In fact, when Houdini first arranged to be nailed into a packing crate and "thrown" into the East River in 1912, police arrived to stop the stunt. Thinking quickly, Houdini chartered a tug boat to take himself and members of the press to Governors Island where he performed the escape outside of the city's jurisdiction.

When Houdini played Broadway's famous Palace Theatre in March 1916, he wanted to promote his appearance by performing his latest spectacular outdoor feat, the suspended straitjacket escape. And what better location than Times Square (then called Longacre Square).

The press agent for the Palace Theatre, Walter J. Kingsley, announced the escape for March 28, 1916, saying the stunt would be Vaudeville's special contribution to the Shakespeare Tercentenary celebrations, which marked the 300th anniversary of the death of the great playwright.

The March 29, 1916 New York Sun recorded what happened next:

Police intervention prevented Harry Houdini from trying to escape from a straitjacket while suspended from a derrick over the Longacre Square subway excavation at noon yesterday. The exhibition was ordered stopped and reserves from the West Forty-seventh street station had to be called to disperse the crowd which had gathered in anticipation of the event. No arrests were made.


The article then continues with this remarkable paragraph and promise:

Walter J. Kingsley, who had announced the affair as "part of the Shakespeare tercentenary celebration," said this fact was what brought out the crowd. The exhibition will take place to-day instead and the police will not be told beforehand where it will be. "Somewhere in New York" is the place so far as the censor will allow it to be mentioned and noon is the time.


It seems incredible that Houdini (via Kingsley) would openly defy the New York City Police in this way. But it was not unprecedented. In England, Houdini was frequently denied permission to do bridge jumps, but he would do so anyway, sometimes employing a double to distract the police. If charged, he would argue that not doing an escape after it had been announced was "breaking faith" with his audience and would harm his reputation. Hence, he would follow through with his New York City straitjacket escape, even if it meant very few people would be there to witness it.

The next day the The Sun reported the following:


HOUDINI ESCAPES 40 FEET UP.
Wriggles From Straitjacket When Hanging by Heels.

Suspended by the heels over a Battery subway excavation forty feet deep Houdini freed himself from a straitjacket yesterday at noon in three minutes. No more work was done in the Custom House thereafter. Persons suposed to be laboring indefatigably in other tall buildings near by also crowded to the windows.

The police who stopped the feat at Times Square on Tuesday, did not interfere. As the scene of the performance had not been announced, there was no crowd on hand. Houdini, it is said, wins $500 which had been bet with him by foremen of the subway construction work.


One has to suspect that this "bet" was a way to justify the escape should Houdini be charged by the police. Presumably, he could argue that he hadn't done it as a publicity stunt, but as a private wager. The Sun's account concludes with this paragraph, which suggests the iconic escape sans the massive crowd didn't quite pack the same punch.

As his heels were securely tied, and as the only difficulty arose from hanging head downward, the escape from the straitjacket was singularly devoid of thrills. Nevertheless, Walter Kingsley of the Palace Theatre was enthusiastic. He repeated that the affair was "vaudeville's contribution to the Shakespeare tercentenary."


The New York Tribune also carried an item about the escape, specifically identifying the subway construction as the Bowling Green station.

So how did we overlook this piece of Houdini history for so long? Well, ironically, we've been staring at it for years!

At the top of this post I used a famous photo, one of a series of photos that have been published many times, but without firm identification. In fact, some have been identified as his 1917 Times Square escape. But on the back of the above photo it says "Houdini 3/30/16." That is the date (off by one day) of the Bowling Green escape!

But it gets better. Below is a terrific unpublished photo from the collection of Mark Willoughby which I first shared on Sunday. As I said then, I've always loved this image, but it has always baffled me. Why is Houdini in a park and why no spectators? 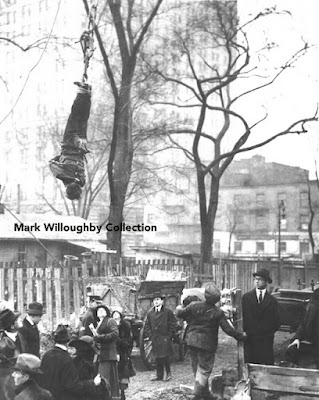 That's because this too is the Bowling Green escape, taken from a different angle, probably at the start of the escape as Houdini was being swung over the subway construction. And how do I know this is the same escape? The rope tie around Houdini's ankles match the known photos perfectly. And if that wasn't enough, check out the dignified man in the long coat and glasses standing to the right of the photo. That is the Palace press agent, Walter J. Kingsley, who also appears in the known photo. Unmistakable. 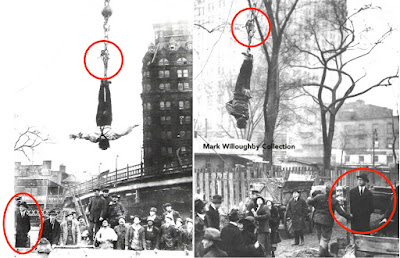 With the rediscovery of this escape, Battery Park becomes an even more interesting stop on a tour of Houdini's New York. The Battery is also the location of the arrival of the Weiss family in 1878, and of Houdini's famous 1914 overboard box escape (another somewhat untold story).

Finally, when I visited the Battery during my recent trip to New York, I took the below photo as I exited the Bowling Green subway station. I wasn't thinking about Houdini. I just thought I was taking a photo of Freedom Tower in the distance. Little did I realize I was actually taking a photo of the location of Houdini's very first suspended straitjacket escape in New York City. 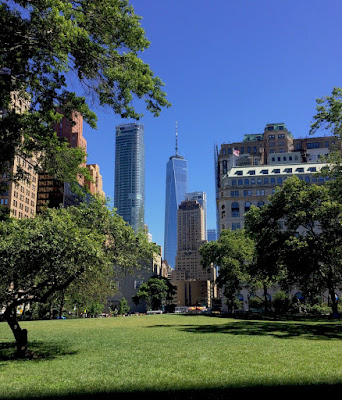 Thanks again to Mark Willoughby for allowing me to share his unpublished photo of what we now know to be Houdini's Bowling Green escape.

Remembering
HARRY HOUDINI
on the
91st ANNIVERSARY
OF HIS DEATH
October 31, 1926

UPDATE: Eagle-eyed reader Karl Bartoni points out that the image of Walter J. Kingsley in both photos is remarkably similar -- maybe too much so! I hadn't noticed this, but it is so similar, it almost looks like image from the Mark Willoughby photo has been inserted into the more famous photo. Or maybe it's just a remarkable coincidence? So to alleviate any suspicion, below is another photo of the escape in which Kingsley can be seen in the same place, but clearly in a different pose. This was actually the first photo I spotted him in and was going to use for this post, but then I saw him in the more famous shot and used that instead. But here's my first choice. 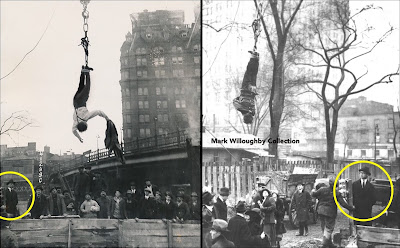